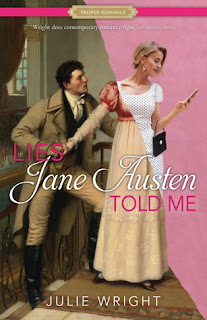 Ever since Emma read Pride and Prejudice, she's been in love with Mr. Darcy and has regarded Jane Austen as the expert on all things romantic. So naturally when Emma falls for Blake Hampton and he invites her home to meet his parents, she is positive an engagement is in her future. After all, Blake is a single man in possession of a good fortune, and thus must be in want of a wife.

But when it turns out that what Blake actually wants is more of a hook-up than a honeymoon, Emma is hurt, betrayed, and furious. She throws herself deeper into her work as CMO of Kinetics, the fastest growing gym franchise in the nation. She loves her work, and she's good at it, which is why she bristles when her boss brings in a consultant to help her spearhead the new facilities on the East Coast. Her frustration turns to shock when that consultant turns out to be Blake's younger brother, Lucas.

Emma is determined not to fall for Lucas, but as she gets to know him, she realizes that Lucas is nothing like his brother. He is kind and attentive and spends his time and money caring for the less fortunate.

What she can't understand is why Lucas continues to try to push her back into Blake's arms when he so clearly has fallen as hard for her as she has fallen for him. It isn't until Lucas reveals to Emma that he was adopted into the Hampton family that she begins to understand his loyalty to Blake as well as his devotion to the child April-she is Lucas's biological niece.

Emma opens up to Lucas about the feelings of abandonment she has harbored ever since she was a child and her mother left the family. As she helps Lucas deal with his past demons, she is able to exorcise some of her own.

This time the Jane Austen angle did not work for me. Which, a big part was due to the characters. There was no strong bond with them. However, to be honest, it was mainly Emma that I found that I did not share the strongest connection with. Lucas on the other hand was find. He was the total opposite of his brother, Blake. Who by the way, I was glad that Emma and Blake were no longer together. Lucas was kind and more personable. Yet, as I stated, even he could not help this story improve more for me. Emma needed to have more confidence and stick with it.

Additionally, as I have read other books in this line, which some of the books have a more modern twist on a classic, I was expecting this from this book. It felt not modern enough. Yet, if the characters had been stronger and the storyline more modern than this book would have been a better hit with me. However, I would try another book from this author.