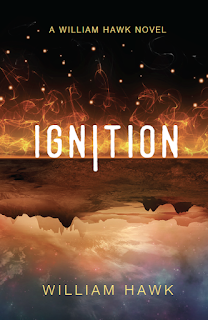 If you flip on the news, it’s clear: our world has no shortage of evil brewing. With hate and violence spreading so fluidly, it can be difficult to set our compass straight on the path of morality, courage and love.
Ignition, a new work of Speculative YA fiction penned by an anonymous author writing under the pen name William Hawk, aims to do just that: provide a compass and space for reflection.

On protagonist William Hawk’s sixteenth birthday, his “boring” life as a seemingly average teen interested in girls, cars and food gets turned upside down. His Change Agent III status, which until now he knew nothing about, suddenly activates at 12:27 p.m. -- complete with strange powers and a responsibility to save Earth from evil.


Just months before, on her sixteenth birthday, Grace’s Change Agent III status revealed a horrible truth: her malevolent twin brother, Roland, is actually Roivas, a dark master capable of destroying the world. After years of being mistreated by her brother and deemed crazed and dangerous by her family, Grace finally encounters in William the opportunity to free herself from terror and help save her planet.
The first book in a trilogy, Ignition follows William and Grace, on the run from the cops, as they develop their connection with each other and their skills as Change Agents, unravelling clues about the secrets of the universe and confronting Roivas head-to-head to discover the source of true power: loving selflessly.

It can be hard to start out a new series. You have to find that right balance of giving enough details about the characters, storyline and the world that the story is build upon but at the same time too much details can bog the book down. Mr. Hawk strikes that right balance. William and Grace are good. They are kind of outcasts but with these abilities as Change Agents, they are interesting. Yet, I would have liked to have seen William and Grace interact together more. They communicated telepathically some.

This book has a bit of a dark edge but still appreciate reading for young readers starting at thirteen. I know my nephews will enjoy this book as much as I did. Which is great as we will be able to discuss this book and continue William and Grace's journey together as they try to save Grace's planet from her brother, Roivas. Plus, there was plenty of action and the pacing was good to keep the story flowing.


About the Author
The William Hawk series is the brainchild of an accomplished inventor, machinist and CEO writing under the pen name William Hawk. A life-changing accident and spiritual awakening sparked the author's inspiration for this story of humanity, hope, selflessness and redemption.