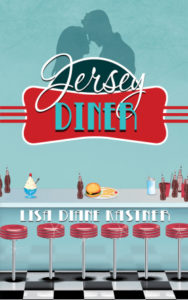 In 1985, twenty year old Lauren has a dead end job as a waitress at the Oaklyn Diner. Alone and with no direction, Lauren becomes ecstatic when the diner is chosen to be the focal point of an upcoming movie, Jersey Diner, starring Jonathan Pearce. Scouted to be a part of the local crew, Lauren builds a relationship with Jonathan Pearce. When filming ends she moves to California to start a new life with Jonathan. In need of cash, she joins her friend Lena Harlow to run Lena’s food truck and catering business when Lauren discovers that all that she thought was real and true are in question.


I have mixed feelings about this book. On one hand it was charming but on the other hand it could have been so much more. What I mean by this is that the characters were not appealing or likable. In fact, I felt bad for Mr. and Mrs. P., the owners of the diner. They were such a sweet couple and the movie crew did not have respect.

Than there is Lauren. She seemed so smart but her actions did not prove it. The way she would fawn all over Jonathan but the feelings were not reciprocated was sad. I understand she comes from a small town where everyone is good but she lived in a dream world; even when Mrs. P and others warned her. Plus, she got caught up in partying and drinking but never questioned if it was too much. Overall, the storyline was fine, the characters needed to have some more personality, and the romance was lacking. Yet, this book did some potential.
Lisa Kastner

Mystica said…
Very similar to a book I read a little while ago. The main character an air hostess was thoroughly unlikable! I had a hard time with the book as a result. Though the story was a good one.
November 26, 2017 at 10:04 AM