The Man in the Crooked Hat 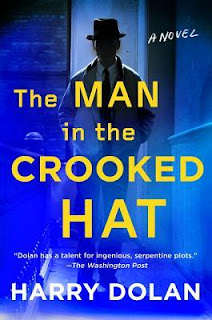 One cryptic clue leads a desperate man into a labyrinthine puzzle of murder in the electrifying new novel from national bestselling author Harry Dolan.

There's a killer, and he wears a crooked hat.

Private investigator Jack Pellum has spent two years searching for the man who he believes murdered his wife--a man he last saw wearing a peacoat and a fedora. Months of posting fliers and combing through crime records yield no leads. Then a local writer commits suicide, and he leaves a bewildering message that may be the first breadcrumb in a winding trail of unsolved murders . . .

Michael Underhill is a philosophical man preoccupied by what-ifs and could-have-beens, but his life is finally coming together. He has a sweet and beautiful girlfriend, and together they're building their future home. Nothing will go wrong, not if Underhill has anything to say about it. The problem is, Underhill has a dark and secret past, and it's coming back to haunt him.

I enjoyed this book. Both men had interesting lives and dynamics to add to the story. I shared an instant connection with Jack. I felt his anguish to find the man responsible for murdering his wife. He is a man on a mission. Which, is the must deadliest type of man.

Then you have Michael. Who, played an important role in this story but at the same time he was underwhelming in a way. It felt like Jack was written more in the story than Michael. In addition, Michael did not put off an engaging personality.

Finally, the suspense was a slow, low burn versus a fast, higher intensity. The slower route was fine and it worked. However, it would have worked better for me if I had been more engaged with the characters which in turn would have allowed me to be more into the story.
Harry Dolan