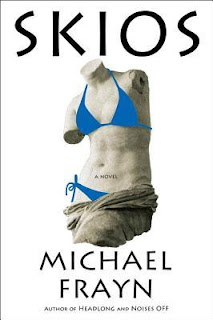 Dr. Norman Wilfred is a guest speaker at the Fred Toppler Foundation. He will be talking about his theories in science. Oliver Fox is traveling to the island of Skios for a hook up. While at the airport, Oliver has a freak out moment. He wonders what it would be like to be someone else. When Oliver gets the opportunity, he runs with it but will he make the most of it.


While, I was expecting to laugh a lot more then I actually did, there were still some funny moments. My favorites scenes involved Norman and what was happening on his side of the island. It was like watching an Greek tragedy (sopa opera). After one antic would end the next would begin. First with Norman getting a suprise bed mate, to him meeting a goat, to the cleaning lady tossing all the clothing into the pool. It was surpising comsidering Norman's age that he did not have a heart attack from all the stress and excitement. Our course, deep down, I think he enjoyed the drama and different people that he met.

On the other hand, Oliver came off as pathetic to me. He was like the clown trying to get everyone to like him, think he was funny, and impress them all. I was not really buy into Oliver. I wanted him to either commit to what he started or just be him. Which he did try to do. Overall, I did have a fun time reading this book. Skios is a comedic, quick, entertaining, summer read!
Michael Frayn