Dreams of Gold. You have to read this book! 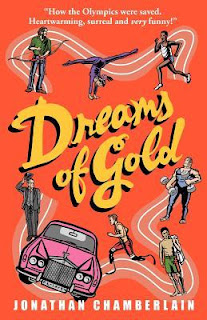 In a Monty Python-type with a bit of Spy vs Spy tale there are many issues to be dealt with in a timely story of Olympic Gold from the British Empire. Rowan Jones, solitary poet from Wales, is absolutely thrilled when chosen by the Committee to be the Poet Laureate of the Olympics. He is “hijacked” on the way to his presentation by a number of Olympics hopefuls who will NOT, for reasons various and sundry, be representing their countries. However….When Rowan makes his appearance, he spouts off thoughts which have not been run by the Olympic group. No one told him they had first approval!


In a place much removed from Wales a beautiful young lady is escaping her guards and making for the border. She’s been kept locked up as the one to win her country’s medals in London and the dictator is not about to let her go quietly.

You have to read this book! I read it in one sitting and laughed my way through it happily. A group of mis-matched heroes coming together in many languages to do what seems right, not just politically right. You’ll love it!

Carole said…
I was wondering whether you would be happy to put up a link in my monthly series called “Books You Love”. The idea is for people to link up posts about a book they loved – it doesn’t have to be one they just posted about. It could be an old fave. I am hoping we will end up with a nice collection of books that can go on our reading lists. Here is the link Books You Loved June Edition
June 8, 2012 at 5:19 PM