Fans of the Notebook will fall in love with Comeback Love. 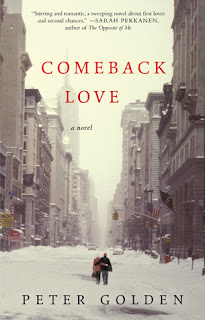 The story of Glenna and Gordon is lke any other typical couple. Boy meets girl...boy falls for girl...boy and girl breakup. However, how many people can say that they got a second chance at love. Not as many as some would like or hope for.


Flash back to thirty five years ago.

Gordon Meyers is an aspiring writer. Gordon's first assignment is to interview one of the medical students involved in the organization for New York Medical Students for the Repeal of Abortion Laws. The medical student that Gordon is interviewing is Glenna Rising. Glenna and Gordon hit things off. Soon, they are hanging out with each other and becoming more then just friends. Gordon and Glenna's relationship is going well until one day Glenna and Gordon have a fight and Gordon walks away. Gordon has not stopped thinking about

It has been a little while since I had had the joy to sit down and just read a book. I mean emerse myself into the story and the characters. The story of Gordon and Glenna was a sad but happy one. I did not expect to love this book as much as I did. This is because I am not typically a fan of romantic love stories. I feel more in love though with the past but at the end when Gordon and Glenna's past story caught up to the present, then I was excited to see how it would end. I did not see it coming as to part of the reason why Gordon came back. Gordon and Glenna's story was one that is treasured and does last a lifetime. Mr. Peter Golden is a rising author and one to keep an eye on. Comeback Love is a must read. Fans of the Notebook will fall in love with Comeback Love.
Peter Golden