Mr. Dugoni sold me with Conviction with this book! 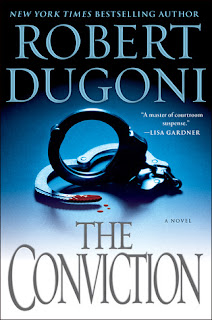 David Sloane is having some issues with his step son, Jake. Sloane's friend, Tom Molina suggests that Sloane, Jake, Molina and his son, T.J. all get away for a guys weekend. Things go well until Jake and T.J. are arrested, tried and sentenced all by Judge Earl Boykin. Judge Boykin is a man not to be messed with.


Jake and T.J. have been sent to Fresh Start, a jevenile facility. Only the facility is more like a boot camp and the guards like to break down the children because they can. Sloane and Molina will have to pull out the big guns if they want to save their sons.

I have not read a book by Mr. Dugoni. After reading Conviction, I will be checking out Mr. Dugoni's prior novels. I was hooked. Sloane and Molina make a great team. They bothn have brains and fight for justice. Sloane had guts, which is why I liked him a lot. Neither he or Molina were afraid to get their hands dirty. Some of the characters surprised me. I admit that I did not see the signs of which sides they were really playing for until the big reveal. What I also really liked about this book was that I could see this actually happening in smaller towns. In this case, I would want someone like Sloane to be my attorney and fight for me.
There was kind of like dual stories happening in this book. The one involving Sloane and Molina and Sloane's son, Jake and Molina's son, T.J. Jake is just as strong. He did not go down without a fight. T.J. was more on the quiet side and I felt sorry for him. He was an innocent bystander. Or couse, I would have liked to have seen him have more courage. I culd not stop reading this book. There was plenty of action and drama. I would recommend this book to anyone, who likes a good legal thriller. Mr. Dugoni sold me with Conviction with this book!
Robert Dugoni