The Donors is a scary, thriller read. Don't be the next victim to scream! 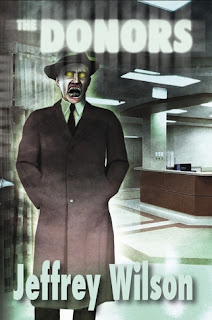 Nathan was at home with Steve, his mother's boyfriend. Steve was mean. It was still going to be a long time until Nathan's mother returns home. Nathan decides to cook himself dinner. Suddenly, Steve comes marching into the kitchen and burns Nathan's arm. Nathan ends up in the hospital in the burn unit, where he will receive skin grafts.

This book was full of gruesome, gut-wretching moments. Even I who can read one after anotehr of serial killer books and I mean the dark stuff, had a weak moment that surprised even me. It was the first time when the Lizard men were ripping into Steve and tearing out his intestines. After that, I was fine but this jsut goes to show you that I was really into this book. When Nathan would be in the Lizard men's world, I could see it so real. It was like I could smell the fear, piss, metallic smell of blood and feel the dirt underneath my feet.

For being a horror book, I thought that Mr. Wilson did a nice job. He did bring life to the characters and made me cheer for Nathan. I liked Nathan. He was a good superhero. He was the perfect person to fight the Lizard men. I could not totally hate the Lizard men as I did find them to play part good guys. They punished the really bad guys like Steve and helped the innocent. The Donors is a scary, thriller read. Don't be the next victim to scream!
Jeffrey Wilson