An American Family is as good as apple pie! 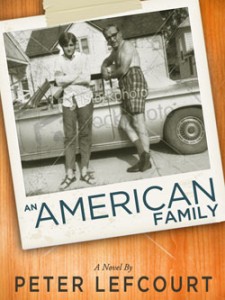 He wanted his kids to place a long-distance phone call to him and pay for it.


Besides taking an extra-heavy course load, so that he could graduate in three and a half years, Michael had a number of business enterprises on the side. Through his father, he had made a deal with a garment manufacturer in the city to make A E Pi fraternity jackets, which he sold at a nice profit to his fraternity brothers. It worked well enough that he branched out and started doing business with Psi U and Delta Epsilon, and, eventually, his jackets were so in demand around campus that he subcontracted work to guys in other fraternities.

On this Friday in November, a week before Thanksgiving vacation, Michael was trying to clear the lunch dishes early so that he could get over to Psi U and deliver the jackets that had arrived from the city yesterday.

Meet the Perl family...Nathan, Lillian, Jacob "Jackie", Michael, Elaine, Steven, and Bobbie. The day is Friday, November 22, 1963. This day will go down in history as one of the most memorable days in history. The day that President John F. Kennedy is assassinated. The Perl family can remember that day but life does go on. Eventually the Perl family survive the Vietnam War, Woodstock, drugs, aids, homophobia, and the attack of September 11th. No matter, how many different directions, they travel or how hard times get, the Perl family does stick together as they are family.


I am not familar with Mr. Lefcourt's work either in the book world or the movie and television world. What drew me to this book was the book summary. This book sounded like some good, old fashion American goodness. I was looking for something like this and I did find it in An American Family. My only criticism is that it took me a little while to get into this book and attach to the Perl family.

The Perl family is an interesting bunch. I mean this in a good way. While, I had no one favorite, each one brought something different to the story and helped mold it. Michael is not really a bad guy, he was trying to do good but just found it hard to survive like the rest of us middle class folks. Jackie, he was a womanizer. There always has to be one of those. Bobbie was the wild child. Readers could live vicariously through her and remember their own wild days. That is what this book was about. The good and bad times. People who lived in the past during these events will remember them and can relate in some way to one or more of the Perl family. An American Family is as good as apple pie!

How has your personal experience as a Jewish American influenced the book?

My experience growing up as a first-generation Polish American Jew in New York was the genesis of this book. I wanted to capture the emotional and psychological effects of the clash of the immigrant Jewish culture with the adopted American one. I was not interested so much in telling my story personally – this book is not an autobiographical novel – but the story of all immigrant cultures, Italian, Irish, African-American, Vietnamese, as well as Jewish. My father came to New York from a shtetl village in Poland in 1922 not knowing a word of English and became a lawyer; I grew up playing stickball on the streets of Queens and became a writer; my son grew up in Los Angeles, went to Yale and became a humanitarian worker who at the moment is in Kyrgyzstan. This evolution, over merely three generations, fascinates me. Our life experiences have been so different, and yet there is an identity linking us together.

I wanted to set this story against the enormous social changes that took place in the second half of the twentieth century: the cultural rift created by the Vietnam War, the rise of feminism, gay identity, the pervasive influence of music. And to show how my characters navigated these changes. I created the fictitious family, the Perls, and decided to tell the story through the shifting point of view of five siblings, all, like me, born in the 1940’s. I chose the two iconic dates of this period – November 22, 1963 and September 11, 2001 – as a parenthesis to enclose the era.

I was interested in the evolution of the family through all these changes – how it adapts to the most dramatic and sweeping changes and still survives as the emotional focus of our lives. I disagree with Tolstoy: all happy families are not alike.

You can follow the rest of the tour here.

Purchase a copy of the book here
Peter Lefcourt