The Skeleton Box may have you trying to stuff a few of your skeletons back in the closet! 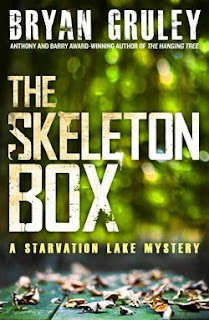 Gus Carpenter is enjoying a beer with Soupy his fellow hockey team mate after their win at the bar, when there is a knock on the door. It is the police. Something has happened. Gus is escorted to his mother's house where the cops and an ambulance are. It seems that Mrs. B. a good friend of Gus's mother was found dead in Gus's mother's kitchen. It appears to be a break in. The worse part is that Mrs. B. is Gus's ex, Darlene's mother. Gus has a vested interest in solving Mrs. B.'s death.


The Skeleton Box is the third book of the Starvation Lake novels. This book can be read as a stand alone novel. Which is a good thing as I have been wanting to check out this series since the first book but just have not found the chance to until now. There is just one down fall you might encounter like I did by not starting with Starvation Lake, the first book. This for me was that I had not built up a connection with the townsfolk and thus this might have had to do a little with why I was not raving as much as most of the other readers about this book.

Although, I like Gus. He has character and is relatable. Also, he is one smart cookie. Which is a good thing to be smart if you are a reporter. It means that you usually get to the story first and can rub it in the faces of the cops that you caught a connection or solved a case for them. Of course, I would not suggest this route unless you want to make some enemies and have a thick back.

The mystery surrounding the murder of Mrs. B. was slow to reveal. I would have liked more action but still an enjoyable read for a mystery/thriller fan like myself. Also, what is there not to like about this book. Anyone like Mr. Gruley, who can find a way to intergrate both a good murder mystery and his love of hockey gets a A+ in my books. Even if we may clash on our favorite hockey teams. The Skeleton Box may have you trying to stuff a few of your skeletons back in the closet!