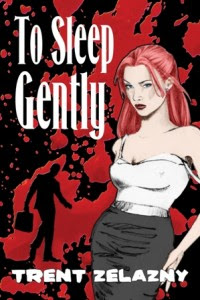 Jack Dempster grew up in a small place with friends and, of course, a “best” friend. He did all right until he got caught after robbing a bank and went away for five years to pay for his sin. You’d think that reading as many books as he did for those five years, thinking about becoming a priest, really wanting to change it would have worked for him.

Fate had other plans. The first thing Jack does upon release is go visit some old friends. They talk him into one more heist in New Mexico. He gets three “assistants” who can barely assist themselves to the john but, you take what you can get. They plan on robbing a hotel/casino in Santa Fe.

Meanwhile, Jack has met his old friend and also a young woman whom he is attracted to but has serious conscious issues about. She doesn’t have – much of a conscious, I mean! As always happens his past comes back in spades and life suddenly isn’t as simple as it was yesterday.

This was my first Zelanzy book, but I doubt it will be the last. The character of Jack pulled me and I found myself feeling bad for him. Try it out. If you haven’t read and of the prior books by this author, I suggest you try them as well. Enjoy!
Trent Zelanzy