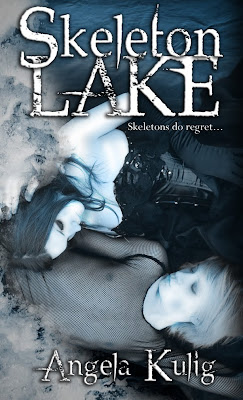 Review by Nancy
Running through the forest, mad as hell, hurt more than mad; Marlow saw the old dock and did what her heart told her to do. She jumped. The water wasn’t cold, even with the snow on the ground. It welcomed her and made her feel loved.

Not so much when she woke up on Lena’s sofa with people staring at her. Kids she knew from school in a “Hi, what’s up?” kinda way. Not close friends at all. Then she gets news she hadn’t planned on. She’s dead.

This isn’t a simple thing at all. Her bones are a lovely bronze color and she can see them when she goes into the lake. Skeleton Lake – the one you can’t see – the one everyone thinks is a cornfield; except for a select few. And this isn’t the worst. There are Others in the forest called Hallows and all they want is Marlow and Lena because the girl Hallows can’t have children.

A great story with a new premise. The characters are very well-written and the lake is an entirely new concept of which I completely approve! Hopefully there will be more.


Title: Skeleton Lake
Author: Angela Kulig
ISBN: 978-1937733-03-2
Release Date: October 21st, 2011
Genre: YA paranormal romance
Synopsis: Unsure if she's drowning or being saved, all Marlow wants to do is run away. Ensnared in a haunting love triangle, she realizes both boys have holes in their hearts—scars from loving the same girl, a girl who managed to stay dead. Now she is being hunted for what she has become and what she never asked to be. Even as a Skeleton Marlow isn’t the worst thing in the night—she isn’t even close.

"Last night you died."
I looked down at my hands. They were still perfect, still showing no signs of their previous mauling. This time I half expecting to see my skin there decaying before my eyes, but nothing happened, until they began to blur.

I blinked, and then hot tears splashed down on the forgotten quilt. I had no idea why I was crying, because at that moment I felt nothing. I was numb or maybe really dead inside. As the panic rose in me at the thought of being stuck that way forever, I welcomed it.

"Ugh," Raiden groaned. "Don't cry! That isn't even the worst of it!"
Not the worst of it? The panic escalated as I swatted at my tears. I tried to stand, but accomplished nothing. I was tired of Raiden looking down at me, and at some point my legs had forgotten how to hold my weight and I fell--never hitting the floor. Raiden caught me by the same arm as before, and quickly pulled me up to face him. He was taller than I remembered. My head barely reached his shoulders, which were so, so close. The musky scent from before began to overwhelm me when I noticed that his lips were close too, and they were moving again.

He released his grip on my arm, but he never stopped touching me. I could still feel the warmth of his fingers where they had dug into me as he stopped my fall--warm fingers--which reminded me nothing of the bony ones from the lake.

"You're warm, and skeletons are only bones."
Those were facts, no matter how incoherent they sounded coming out of my mouth.
"I can show you," he said.
And I had no idea what he meant by that, but I was already agreeing.
"Come with me?" he asked in a whisper.
He was already pulling me out the door. His breath on my cheek lingered longer than I thought about not following his lead.

After the black walls of Raiden's room, the cheery yellow hallways were almost painful to look at. The walls were all lined with pristine white molding. No dust, no dents. I had a hard time believing this was even the same house. After everything I had heard today, believing that Raiden's bedroom door was some kind of portal to another dimension would not be a stretch.

Out of the corner of my eye I noticed something reflective. I whipped my head around so quickly, the momentum of it nearly sent me to the ground. In a frantic second, I expected to see the lake there, but it was just a large mirror in an antique silver frame. It was polished to perfection, I didn't even glance at it, I was busy looking at the horrid sight in front of me.

Randomly I thought, "At least I still have all my skin." This wasn’t at all comforting.

Half my dark hair stuck flat to my head, and the other half was a frizzy mess. My lips were pale, but a line of thick dried blood sat in the creases. Likely a leak where I had bitten my tongue earlier and I was wearing someone else's clothes.
"Where are my clothes?" I asked my reflection.

Raiden who had been trying to pull me further along turned back to face me, and for the first time I swore I saw him blush.
"What your run through the woods didn't shred, the like had for dinner."
I failed to breathe. Did that mean that...?
"When you found me, was I... naked?"
"Marlow," he breathed, hot on my face again. "When I found you, you were nothing but bones."
Angela Kulig