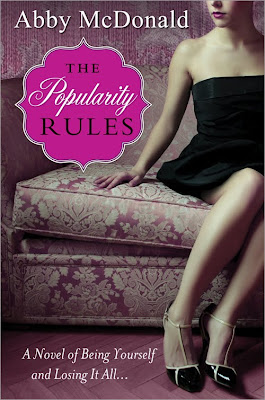 Katherine Elliot is a music journalist for Think Louder. Though, she is at the bottom of the totem pole. This is because she does not kiss ass. Her co-workers disrespect her and so does her room mate. As if it could get worse, Kat’s ex-friend, Lauren Anderville reappears. The last time that Kat saw Lauren was when Lauren was ditching Kat for popularity. Lauren is pretty, rich, hangs with the coolest people and has a successful job. Lauren tells Kat that she wants to start over with Kat. In fact, she is willing to break one of the rules of the Popularity Rules book by sharing her secret.

The Popularity Rules book is based on the simple, psychological truth that nobody ever recovers from high school. In reality, this actually makes sense. While, we all strive to better ourselves, there is a small part of us that still reverts back to our former self in high school. I liked Kat. She showed spunk, however I also felt like she needed to take a stronger and louder stand for herself. She left Lauren just step in take the reins. Lauren did not have much substance in the way of being a three dimensional character. I knew that this book would be about clichés and popularity but I did not realize how much this turned me off. I guess if the story had been up to par and the characters than I may have liked the book better but the book and me just did not click. I do know that Abby can write as I read The Liberation of Alice Love and liked it a lot.
Abby McDonald