The Gamble of the Godless 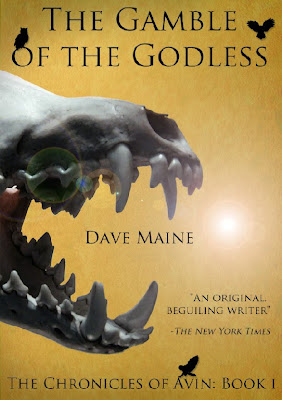 Avin saw nothing wrong with helping a soldier get back on his feet. He also saw nothing wrong with walking into town with him to hear the news. You see, Avin has dreams and his seem to come true or have already happened. His dream of a fierce battle had borne fruit in the battle that Ax (the soldier) had been in. Most had been slaughtered.

Through various means, Ax and Avin, along with Jocelyn the hired sorcerer, acquire traveling companions of the creature kind: Benn the horse and Ulkia the owl. They are captured by the wolves and tried for killing a Mantid (possibly a praying mantis-type critter) and an Alpha wolf in battle. Ulkia gets them off just in time and they agree to take another captive of the Wolf Tribe to the border with them. Which is how a cheetah named Summon the Wind becomes part of the group.

The land is in an uproar. Each beast has it’s own land, each human is prey and somehow the humans need badly to win this confrontation. Will Avin and Ax find Avin’s brother in one piece or will the fact that Drew joined up with the Godless ruin Avin’s hopes forever?

This book was quite interesting. I didn’t really like it at first but, as I read on, it caught me. Who doesn’t want their brother to be a good guy? Summon the Wind was a riot! Wait until you read about the cheetahs (basically dopers in disguise) and the Equine Empire. You will love it. Dave Maine has a winner in this tale and hopefully the beginning of many more.


Check out more about this series here
Dave Maine

Unknown said…
Not really my kind of book but you did a good job with the review. And, for reasons unknown, the cover really appeals to me.
October 1, 2011 at 3:20 PM

David Maine said…
Hi folks, thanks for the very kind review! t's much appreciated. Readers who are curious and want to find out more about the book can check out the web site for the whole seriess-and yes, there is a series on the way: http://thechroniclesofavin.com
Cheers!
October 4, 2011 at 3:26 AM