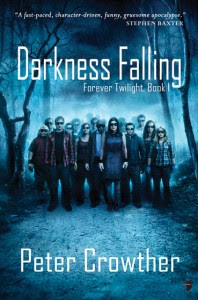 Martha and her husband, Ronnie have boarded a plane to head back to Atlanta. Things are going alright until all of a sudden a bright light flashes and Martha is gone. It seems that Martha is not the only one missing. Most of the passengers on the plane have disappeared. The few people who are left are in for a big surprise, when the others return. Though not the same way that they left.

I wanted this book to be so much better than it actually turned out to be. As I was reading it, images of the Left Behind series was flashing in my head. Due to the way that the people disappeared and than the set up afterwards. Just like with the Left Behind books, there was a lot of dialect with the characters. There were about three or four main story lines but nothing really hinted at what the true effects of the disappearances of all the people were until later in the book. So this made reading the book, so going. While, I could see where the story was going, I would have liked the action and intensity levels to be amped up. I hope that this will be remedied in book two.
Peter Crowther

Cheryl said…
I agree Dana but this book did show potiential, so maybe with book two it will get better.
October 12, 2011 at 4:55 PM