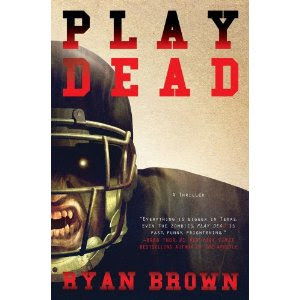 Killington’s high school football team, The Jackrabbits have played a good season. They are only one win away from becoming district champions. The town and the boys are pumped.

Cole Logan is the quarterback for the Jackrabbits. He is accosted by several of the Badgers. The Badgers are the Jackrabbits rivals from Elmwood Heights. Two of Cole’s fingers are hacked off. Cole refuses to go to the hospital. Savannah, the sheriff’s daughter drives Cole home.

Black Mona is rumored to be a witch. When one of her cats is gutted and brought back to life, it is Cole and Savannah, who find the reincarnated cat and bring him home. Mona is the biggest Jackrabbit fan. She offers Cole a way to get revenge.

The Jackrabbits were on their way to play the Badgers when the bus they were riding in, goes off the roads and sinks. The Jackrabbits with Mona’s help come back but at what price?

Play Dead is a zombie, feeding, frenzy good time. It is amazing that this book is Mr. Brown’s first novel. He writes like a pro. I really got into this book right from the start. I would put it down, only to tell me husband something interesting that was happening at that moment. There were some gruesome parts but nothing too over the top. I like that things were simple and not a cheese fest. Play Dead is a one sit read.

The only issue I had with this book was the naive ness that the town’s folks had with the boys. I found it a little unbelievable that they were really in the dark about what their sons really had been turned into. Overall, I liked this book a lot. I can’t wait to see what Mr. Brown thinks up next.
Ryan Brown

Cheryl said…
Cheryl- You will really enjoy this book.

Becky- I researched and on Mr. Brown's website it says" He is the son of Michael Brown, an award-winning video producer, and Sandra Brown, a best-selling novelist.