The Edge of Ruin 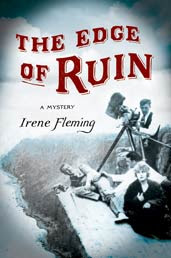 Emily Weiss was sitting at home, when her husband, Adam walked in and made a big announcement. One that would change their lives forever. He tells Emily that they are moving to New York. He plans to make a movie.

Emily and Adam decide to make a Western titled Revenge in the Saddle. It features an eccentric cast of characters from Indians, who have no acting experience to Vera Zinovia, a famous diva, Fast-handed Bob, who can’t keep his hands off the bottle, Erno Berg, the sexy male lead.

Seamus Duffy works as a Trust Detective like a Pinkerton. He is on set to watch over the proceedings. When Duffy’s body is found with a railroad stake in him, it is Adam who is the prime suspect

What do you get when you combine old Hollywood glamour, Western flair and really good writing…The Edge of Ruin by Irene Fleming. I liked this book. It was like a story within a story. I like that Emily had a take charge attitude. She really showed that not just men can produce a movie. All of the different characters really came alive and shined in this book. There were so many different and interesting people that I couldn’t choose a favorite. Reading this book, I was playing out the scenes as if I was watching the plot play out in my mind in the form of a black and white movie. Don’t miss your chance to check out a really good book with The Edge of Ruin.
Irene Fleming