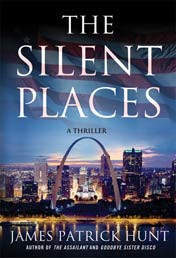 Lieutenant Hastings and his team are the best at their job. That is why their next job is to baby sit Senator Alan Preston. Seriously though! This is exactly what Lt. Hastings is thinking. He doesn’t have time to watch over Senator Preston, when murder doesn’t stop. Unfortunately, Lt. Hastings has no choice in the matter.

It seems that a John Reese, who was a former CIA agent and a trained sniper who supposedly betrayed his country has broken out of prison. When Senator Preston was a US District Attorney he prosecuted Reese. The last thing Reese before he was sent to prison was that he was coming after Preston. It appears that Senator Preston is hiding something from Hastings. It has to do with Reese. In a world of secrets, can Hastings find out the truth before it is too late?

The Silent Place is book four of the Lt. George Hastings novels. If you are a fan of political suspense thrillers then you should sneak past security and pick up a copy of The Silent Place today. This book pitted two strong characters…Hastings and Reese, against each other. They were playing this dangerous game of Hunter and the Hunted. I was cheering for both men. There wasn’t a moment in this book where I wasn’t intrigued. The ending I thought was alright. Though nothing that won’t keep me from checking out books one through three. James Patrick Hunt has me on the hunt for more.
James Patrick Hunt

Mystica said…
i like detective stories in a series so thanks for highlighting this one.
May 30, 2010 at 8:53 PM