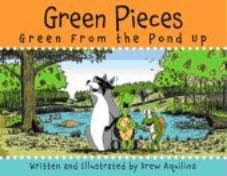 Life is never boring at the Pond when Iggy, Radic, Cabby and Roc meet. Enjoy a humorous yet educational look at the world from nature's point of view through Cartoonist Drew Aquilina's cartoon strip collection, Green Pieces: Green From the Pond Up

Chandler, AZ - May 27, 2010 - People around the world are familiar with some part of nature, be it the environment or its inhabitants. All of nature serves as the setting for the characters in the collection of cartoon strips, Green Pieces: Green From the Pond Up, by Drew Aquilina.

Clouds, insects, birds, mammals and plants are "game" for the cartoon strip Green pieces©, aturally, the world's greenest and most environmentally friendly humor. Nothing is overlooked by this clever feature. The cartoon strip and Green Pieces: Green From the Pond Up highlight four main characters who introduce the reader to the life and times around a typical wetland, in this case a pond. Led by a claustrophobic turtle named Iggman, the action picks up once humans leave the scene. "Iggy's" friends include an annoying dragonfly, Radic; an omnipotent techno-bullfrog, Cabby; and a rogue raccoon, Roc. Meet the Pond Friends:

-Iggy: Cleverly yet cautiously approaching the world surrounding him, Iggman seeks the simple
pleasures of life. Iggy, (as his friends call him) has a unique perspective on his environment. As a turtle, his species' longevity promotes wisdom. It is Iggy's naiveté, however, that gives away his true age. His shell, the seemingly magical carapace that follows Iggy everywhere, is the center of attention. The shell serves as Iggy's sanctuary as well as his burden. Unusual for turtles, Iggy also battles bouts of claustrophobia. He tempers his affliction by frequently giving the outside of his shell a good coat of wax.

- Radic the dragonfly: Radic epitomizes the word "bug." Making his rounds at the pond and through nature, Radic stirs up trouble wherever he flies. This pesky but loveable cad is the self- proclaimed "best friend" of Iggy. It is unknown whether Radic truly seeks Iggy's friendship or simply covets Iggy's warm, comfy-cozy shell on which to land and sleep.

- Cabby the bullfrog: This techno-frog's DNA was altered by pollution during the critical tadpole stage. As a result, his brain developed instead of his legs. Cabby's genius lies in the scientific realm with heavy emphasis on computers and physics. While normally focused on his scientific pursuit, from time to time Cabby will indulge in less lofty aspirations to help get his wetland friends in and out of trouble.

- Roc the raccoon: Roc is your friendly neighborhood raccoon. Endearing and charming to a fault, he possesses an uncanny ability to recognize the reality of most situations. As the local rogue, Roc gets through life by living out of dumpsters and trash cans and picking up odd jobs from Cabby. Roc reminds the reader of the uncle that families don't talk about much. When he is not sleeping off a night of heavy rubbish rummaging, Roc can be a very good friend and fun companion.

WHAT IS THIS BOOK ABOUT?

Follow the delightful antics of Iggy, Radic, Cabby and Roc as they frolic through nature. Every day you read stories about a new species of animal or a scientific or environmental breakthrough. Find out the real cause of "cloud to cloud" lightning, discover what happens when the T-Rex is ransported into today's society, be amused by a cartoon character lawsuit brought by P.A.N.I.C.,

Parents Against Nature in Cartoons, and realize just how much of a "BUG" dragonflies can be.
Clouds, insects, birds, mammals and plants from all over the world are game for Green Pieces:
Green From the Pond Up. After all, people world-wide are familiar with some part of nature
and that natural, environmental backdrop serves as the stage for this cartoon compilation.

WHAT MAKES THIS BOOK UNIQUE?

Our environment is a serious subject with the threat of global warming, melting polar ice caps and holes in the ozone hanging over us. Green Pieces: Green From the Pond Up, however, takes a light-hearted look at nature around us. Best of all, Green Pieces: Green From the Pond Up is a delightful read for any age group. Grown-ups will be reminded of what they were told by their parents - to respect nature - and young readers will learn, through the eyes of the four main characters, why it's important to respect nature.

Green Pieces: Green From the Pond Up, by Drew Aquilina

Cartoonist Drew Aquilina's first comic strip originated as Iggman on Campus in 1987. It was published for three semesters in The Collegian, UMass Amherst. Once converted to Green pieces©, the strip was copyrighted and ran in Western Connecticut's university paper, The Echo, in The Newtown Bee, Newtown, CT and Danbury, CT's daily The News-Times, the school paper at Arizona State University, Tempe, AZ, and is currently enjoyed daily in various local papers and at http://www.greenpiecescartoons.com/

Aquilina and his wife, Lisa, live in Paradise Valley, Arizona.

Note: Review copies of this book are available by emailing your request to ops@bostickcommunications.com