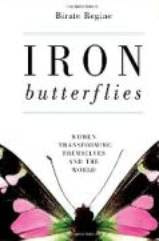 themselves and the world

which involved in-depth interviews with 60 accomplished women in eight countries, Iron
Butterflies is an intellectual and emotional tour de force. "Destined to be recognized as one of the most important books of our time," comments one early reader.

Regine reveals in elegant and persuasive prose, and bolstered by cogent statistical data, what she describes as "a revolution in plain sight." Namely, there is an underground movement of women who are claiming their authentic feminine selves, in combination with a strong masculine side, in achieving extraordinary success in a diversity of worlds. These women include a former Prime Minister, a Nobel Peace Prize winner, a former governor, a Pulitzer nominated, internationally

acclaimed novelist, CEOs of major enterprises, an Italian wine maker, a Unitarian minister, and many others.

Regine calls these women "Iron Butterflies," because they bring a will of iron together with the nurturing touch of a butterfly, a novel and powerful combination. In Iron Butterflies, Regine tells of the personal and professional struggles these women went through, before they finally
emerged as new and more effective leaders.


The women were often movingly and brutally honest about their struggles, so much so that the reviewer for the Huffington Post said of one of them, "You'll swear that the author got her

drunk." She didn't, of course. Regine simply has a rare talent for reaching into the hearts and souls of total strangers, engendering instant, deep trust. Iron Butterflies is rich with these privileged glimpses into the dark moments of challenging journeys that ultimately led to triumphs.


There is a deep irony in the Iron Butterfly revolution, says Regine: the feminine qualities of collaboration and nurturing that once disqualified women from positions of leadership, because they were "too soft," are now seen to be the secret of extraordinary success in the new world in which we find ourselves.


Regine, a Harvard educated developmental psychologist, analyzed hundreds of hours of Iron
Butterfly transcripts, and uncovered an entirely surprising answer to a question she hadn't even asked: What does it mean to be a strong woman? The answer is not just to embrace the
aggression and determination that has so long defined what leadership is all about, though they can be as tough as any man. No, the secret to Iron Butterflies' success is their ability to confront vulnerability, in themselves and others, and to metamorphize it into a new strength.

Iron Butterfly leadership also transforms the notion of power in human organizations, from
power over to power with. In so doing, they change a culture of domination and greed to a
culture of collaboration and care.


Early readers say that the stories of Iron Butterflies' struggles and ultimate success are inspiring and life changing. Not just those women in positions of power, but for women everywhere, young and not so young. Every woman can become an Iron Butterfly. Even men can, too, if they are prepared to take on the challenge.


The publication of Iron Butterflies this year is especially propitious, because ancient predictions from civilizations as far apart as Meso-America and Asia point to 2010 as the beginning of the inevitable transition from the Era of Men, which has been in full bore for 5000 years, to a new, more embracing, more human era: The Era of Women.

People everywhere are increasingly fed up with the old order, the masculine-driven culture of domination. They are looking for something different, a culture of collaboration.

Iron Butterflies are leading the way!

Birute Regine, Ed.D., earned her masters and doctoral degrees in developmental psychology at Harvard, working with the renowned psychologist Carol Gilligan. She spent 25 years in private practice as a therapist, before realizing her childhood ambition of becoming a writer. Her first book (Simon and Schuster, 2000), The Soul at Work: embracing complexity science for business

success, (co-authored with Roger Lewin) garnered great critical acclaim (Tom Peters described it with one word: "Brilliant!"). Regine is an experienced speaker at national and international conferences on "the people side of business," and has been a guest on numerous radio and television programs.

Note: Review copies of this book are available. Send mailing address along with the title of the book and author to ops@bostickcommunications.com