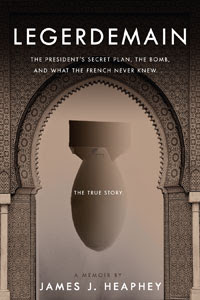 Legerdemain is about the true story of U.S. Air Force undercover operative Jim Heaphey. The reader gets to travel through Casablanca, the fairs in Marrakesch, plus Cairo and Cyprus. Mr. Heaphey was stationed in the French Morocco. This was a time when the U.S. was allied with Morocco to defeat the Soviet Union without France's knowledge. The United States of America was able to store atom bombs at some of the Morocco air bases secretly. By having the ability to do this the U.S. would be able to set plans in motion that would go down in history.

First off I have to tell you I don’t typically read non-fiction novels. So when I saw Lisa Roe http://onlinepublicist.net/ offering Legerdemain up for review and after reading the book summary I figured I would give it a try. Let me tell you I am glad I did and this is why. In writing Legerdemain, Mr. Heaphey is able to tell his part in what his responsibilities were as well as his relationship with the Islamic people. What an awe-inspiring novel. Here you take someone like Mr. Heaphey, who not only risked his life but in process was able to give the U.S an edge over the Soviet Union. I commend Mr. Heaphey for what he did. He is a true hero.

James Heaphey is professor emeritus, Graduate School of Public Affairs, State University of New York. In addition to teaching and writing he directed political development programs in Brazil, Costa Rica, Cyprus, Egypt, Lebanon and South Korea from 1961 to 1992, and gave seminars on the politics of developing countries for American military officers stationed in Europe and the Far East from 1968 to 2003.

The Bookworm said…
wonderful review!
I have gotten a book for review from Lisa Roes website and enjoyed it very much.