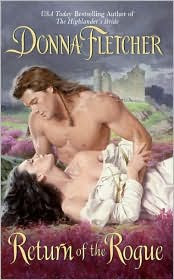 Honora Tannach comes of age in the Scottish highlands, and has been living with her stepfather, Calum, since her mother died. Honora is betrothed to the son of a Scottish laird, Artair, but on the day of their wedding, a stranger arrives to the celebration. This man turns out to be Artair's eldest brother, who was held captive by barbarians, and has escaped, his name is Cavan. Honora's greedy stepfather, insists that Honora is legally wed to Cavan instead of Artair, since the paperwork he signed said his daughter is to marry the next laird. So by a twist of faith, Honora is instead wed to Cavan, who she fears since he is angry and scarred, coming back from being held captive for so long.

Cavan has no patience for Honora, he thinks she is weak and too frightened and he is not happy to have her as his wife. He is angry since coming home and feels guilty for having left his younger brother behind with the barbarians. He is also upset that he is suddenly married to a stranger, so upset that he won't consumate thier marriage. Slowly but surely be begins to warm up to Honora and have feelings for her, even though he tries to deny it and push her away.

Honora has feelings for him as well, but thinks he dislikes her since he is always angry. She comes to know him better, and sees that he feels guilty over not bringing his brother home with him.

The romance is sweet, I really enjoyed this read. Cavan is tall, dark and handsome and he's got a bit of a 'bad-boy' streak to him, but really he's just misunderstood.


This book sound good? Naida gave it 4 out of 5 stars and she is giving it away. You know you want it as this is one of your guilty pleasure is reading romance books.


So head on over to http://thebookworm07.blogspot.com/
contests

Anonymous said…
LOLOL - I was just over at Naida's and then came over here. When I saw the same book cover, I thought for sure I must be at the wrong place...lol!

cheryl I'll enter you in the prize drawing,thanks for blogging about it.