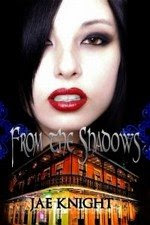 Part one of this story starts off with Angelo Milonne turning Lily Fontaine into a vampire. He than leaves her to fend for herself. Lily has been surviving for many centuries in New Orleans. While out and about one day she meets Vallon Paige. Vallon is human, works in a tattoo parlor called Under the Gun and is falling in love with Lily. Angelo comes back for Lily but only to find out that she has fallen for Vallon. He won’t let Vallon take Lily away from him, so he decides to kill Vallon. Angelo almost succeeds in killing Vallon and leaving him for the dead. Lily locates Vallon in the nick of time but he is on the brink of death. Lily makes a decision to turn Vallon into a vampire.

Part two introduces us to Jaidyn Pierce, her son Skye, her aunt Fiona Monroe along with giving us more in depth knowledge about who Lucius Silva, friend to Vallon, is and Aurelia Larue. Jaidyn meets Lucius at Under the Gun. Lucius has long black hair, a long nose, and shapely lips. One look at him has the ladies swooning for him. Lucius has not met a woman like Jaidyn in a very long time. Part two has a lot of surprises in it.

For some reason I got confused through parts of this book. Where I went astray was when the story would change from part one to part two. It took me a while to figure out what the relation to the new characters was to the existing ones I was introduced to at the beginning of the story. Other than this, From the Shadows was a very good book. There were a lot of sexy vampires with Vallon, Lucius, Lily, Aurelia and even Angelo. From the Shadows made me think of the movie Interview with a Vampire in the fact that both Angelo and Luca felt tortured in what they had become in addition to seeking redemption for their sins. Plus, I enjoyed the fact that this was not your typical vampire book, where vampires are just out to get some blood in addition to there being a vampire slayer. No, From the Shadows was only about vampires who were looking to get revenge on each other. The way it ended makes me believe that I could be seeing more of these characters in a future story. I hope this comes true as I would enjoy visiting with everyone again in From the Shadows. This was a good-quality first novel from Jae Knight.