When Mr. Timothy Hallinan contacted me and asked if I would be interested in reading his book and doing a guest blog. You can bet I said yes and I have to tell you it was worth it as The Fourth Watcher was a good book. 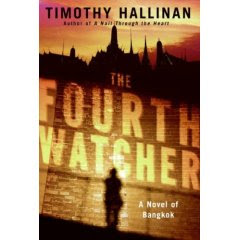 Poke Rafferty is a writer, who lives in Bangkok with his fiancée Rose and his daughter Miaow. He is looking to write more than just travel novels. Poke's novel titled "Living Wrong" is about living outside of the law. Poke wants some real life experience for his book so he has his friend Arnold Prettyman, a former CIA agent teach him how to follow people without getting caught. The only thing is Poke never realized that he would end up smack dab in the middle of a high stakes international thrill ride that would have him not only running for his life but would have him digging up some dirt and secrets that some very powerful people want left alone. Also, Poke is in for the surprise of his life when a long lost someone walks back into his life. Unfortunately there will be no happy reunion as this person has come calling on Poke for his help. Plus you won't believe how it all ends!

I enjoy reading international, suspense thrillers. From the summary I had read about The Fourth Watcher I knew this book was going to be right up my alley and would be good but I didn't realize it would be better than good it was great. The characters had some wonderful depth to them in addition to the fact that I thought they were all some in their own ways. I like when I read a book where the characters all have an equal part and can relate to each other in some way or other. From the first page to the last The Fourth Watcher picked up steam and keep on moving full-blast on a tank of high octane adrenaline rush that left you wanting more. I could tell Mr. Hallinan was passionate about his writing and his books as it showed. Mr. Hallinan could take you anywhere he wanted as well as make you feel like you were really there with Poke or anyone of the other characters in The Fourth Watcher. So if you are a must-read book than you have to check out The Fourth Watcher.


What's the craziest thing I've ever done to research a book? First, a blatant plug for my new book, but it's related directly to the question.

In THE FOURTH WATCHER, my protagonist, a rough-travel writer named Poke Rafferty, is tired of traveling and has decided to change genres. He's landed a contract for a book called Living Wrong, the premise of which is that he'll apprentice for a couple of months to six people who straddle the line between legal and illegal activity: professional gamblers, smugglers, and so forth – and then he'll try that activity one time himself. Each chapter of his book will trace the apprenticeship and the attempt.

At the time THE FOURTH WATCHER begins, Poke is paying a former CIA operative named Arnold Prettyman -- one of the thousands of spooks who were made irrelevant by the end of the cold war and rolled downhill to Bangkok -- to give him a crash course in surveillance, tracking people through the city and learning to lose people who are tracking him. The first sentence of the book launches this strand of the plot:

“Poke Rafferty has been on the sidewalk less than five minutes when he spots the tail.”

As it turns out, the skills Poke has learned from Arnold are essential to his surviving the next week of his life, which threatens everything he holds dear.

Well, Poke is a lot braver than I am. I do the vast majority of my research online, where the worst thing that can happen is a bare-knuckle fight with some spyware. For THE FOURTH WATCHER, which also deals with the wholesale counterfeiting of American currency by the North Koreans, I managed to find not one but two doctoral dissertations about North Korean counterfeiting – of money, medicines, cigarettes, practically anything you can slap a brand on and misrepresent. (By the way, North Korea makes more from these counterfeiting activities than it does from legitimate foreign trade.) 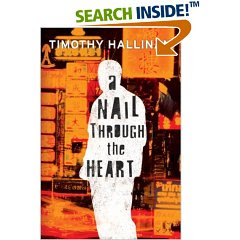 So, crazy. One story strand in A NAIL THROUGH THE HEART, which is the first of Poke's adventures, takes the reader back to the terror and brutality of the Khmer Rouge's reign over Cambodia, a four year period during which almost a quarter of the population was murdered or died of starvation and overwork. I flew into Phnom Penh (where I now live part-time) for the first time ever, and began naively to ask questions. I was trying to track down one or two of the former guards at the infamous Tuol Sleng prison, and also one of the seven people who survived being incarcerated there – one of seven out of the 17,000 who went in. I was aware that the search was making my driver/translator very nervous, but like a complete idiot, I ignored the signs until a policeman came up to us and started asking me what I was doing. The police in Cambodia are pretty much unaccountable. They can do whatever they want. My driver's nervousness suddenly made sense.

What I didn't know then was the extent to which the former Khmer Rouge leadership is woven into the power structure of today's Cambodia. A Westerner who goes around asking certain questions attracts official attention fast. I had a long “chat” with the cop, and he finally suggested rather strongly that everything I needed to know was available in the books that had already been written about the regime. He was about fifty, thick in the chest, and had an aura you could scrape your knuckles on. All the way through the talk I kept wondering what he'd been doing from 1975 to 1979.

So I quit. I did talk to a bunch of people who had lived through the regime, but I kept away from anyone who had anything to do with Tuol Sleng. Later, the International Commission set up at long last to prosecute the Khmer Rouge butchers hit an official wall that has still not been breached: there are a total of five people in jail, and not one of them has come to trial yet. Next year it will be 30 years since these murderers were driven from power.

By the way, in the next book, which is tentatively titled MISDIRECTION, Poke is researching final chapter of Living Wrong, about being a card cheat, when he wins, in a crooked game of Texas Hold'em, the right to write the authorized biography of a Thai billionaire with a violent and highly guarded past. Within hours, one group threatens his life if he writes the book, and another group threatens his life if he doesn't. I'm doing the research for that story line mostly by watching the World Series of Poker on TV. That's a level of risk I'm comfortable with.

He has some really pretty music playing on it and his book Nail Through The Heart even has a soundtrack for it.
Timothy Hallinan