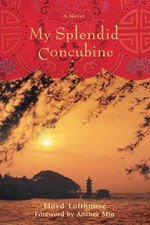 My Splendid Concubine is the tale of Sir Robert Hart, Inspector General for Chinese Maritime Customs. My Splendid Concubine is based on true events but Mr. Lofthouse felt that in order to really do Sir Robert Hart’s story justice he wanted to make this book somewhat fictional vs. non fictional. He was the only foreigner the Emperor trusted and was such a huge influence in China. He was responsible for generating one third of the national revenue crucial to the Ch’ing Dynasty’s survival.

Mr. Lloyd Lofthouse did an amazing job with My Splendid Concubine. I thought Sir Robert Hart’s story was a beautiful one of romance for both his concubines as well as the country of China. I have to admit I have never heard of Sir Robert Hart but after reading his story I have a great admiration for what he did in addition to his determination to learn the culture there and become a Chinamen. You can definitely tell all the labor of love Mr. Lloyd Lofthouse put into writing My Splendid Concubine. Mr. Lofthouse wanted to tell the earlier years of Sir Robert Hart and when he was an interpreter for the British Consulate in Ningpo with his concubine Ayaou. Thank you, Mr. Lofthouse for making sure Sir Robert Hart’s story got told.