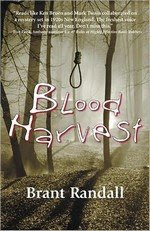 The year is 1928 in New England. Angus DeCosta is the son of Mary Elizabeth and Nick DeCosta. Mary Elizabeth is daughter to the MacKay clan. Her family was not happy that she married wine grower Nick as they considered him a non-white European. Angus is dared by some of his friends to cross the county borderline of Potemkin. Angus is found groping Jackie Sue MacKay by her cousins. Furthermore none of the MacKay clan had ever seen Angus before. When Jackie Sue’s cousin asked for his name and he said it was Angus, this made matters worse as it just so happened the cousin’s name was also named Angus. So the MacKay clan gang up on Angus and run him back over the county line and throw him naked over the bridge. Since he can’t swim he almost drowns. About this time Nick comes by and sees a bunch of men looking down at the water. He realizes that his son is down there, so he grabs his shotgun and proceeds to shoot at the MacKay clan. There is now a trial to determine who was at fault between the two Anguses. Some people want justice now and before you know it there are two bodies out in the woods.

Ichabod Lawe, the deputy marshal in the case between the two Anguses walks the reader through what unusual as well as evil transpired that year. Brant Randall digs into the horror that, as he found out, is still taking place today, which involves a group of people that call themselves the KKK. Blood Harvest is a very well-written novel. The one thing that I really enjoyed was how the book was split out into different parts. Each section gave you a heading of who you were going to meet next in addition to how they played a part in the whole tale. Blood Harvest really hits you hard. After reading the story you feel a sense of turmoil that a group of people could just take someone and do things to them without paying any consequences. Brant Randall also showed that not everyone agrees with this type of behavior and justice can prevail in the long run. Blood Harvest does take on a serious topic but luckily Brant Randall was able to keep this book on the light side by infusing some light-hearted witty humor to his characters.