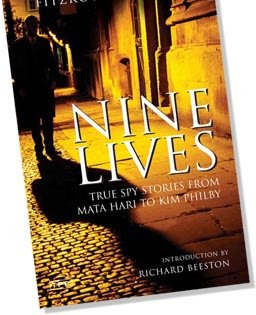 I have slowly been getting into reading more non fiction books and this one sounds like one I would enjoy.

In Nine Lives, Fitzroy Maclean brilliantly tells the true stories of nine remarkable spies. Among them, there is the captivating Mata Hari: who was executed by firing squad for allegedly spying for Germany during World War I; Richard Sorge: leader of the Tokyo Espionage Ring and the man who informed Stalin of the German attack on Russia in 1941 weeks before it happened; and Kim Philby--the "third man"--a prominent member of British Intelligence, a communist and a spy for the KGB. Brimming with drama and adventure, Nine Lives separates myth from reality and vividly brings alive the characters and events that surrounded these nine legendary spies.
Fitzroy Maclean

The Bookworm said…
this does sound like a good one, I raely read non-fiction.