June 24, 2008
This is a book I have on my wish list to check out. The only thing is that this is book 3 in the series and I have never read the other books so I will probably have to go check out the first two also. Oh well still sounds like a good book. Actually I will be getting a copy of this book and will post a review of it later. Thanks 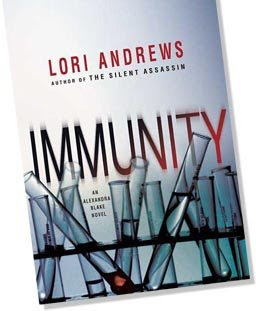 One bizarre death is just that---a death. Two? Could be a coincidence. But in Lori Andrews’s latest thriller, geneticist Dr. Alexandra Blake discovers something much more dangerous than a killer---an epidemic.Taking a break from decoding the genetic sequence of a tropical disease, Alex takes on an investigation into the gruesome and unexplained death of a DEA agent on a mob stakeout in New Mexico. Within hours, she uncovers similar deaths throughout the Southwest. Is it a naturally occurring epidemic or has a lethal bioweapon been released in the United States?With the nation’s attention focused on a provocative presidential race, Alex’s attempts to warn Homeland Security fail. Only with the help of a rogue DEA agent and a cutting-edge supercomputer will she and the rest of her team at the Armed Forces Institute of Pathology stand a chance of putting an end to the devastation before public hysteria rages out of control.From Alex’s lab to the closed rooms of a killer’s mind, Immunity maps the perfect sequence for an infectious, edge-of-your-seat thriller.
Lori Andrews

Anonymous said…
Oooooo...this looks good. I really hate when I find a book like this just to discover it's not #1 in the series. I've stopped going back to read the first ones and jump right in the middle of it all...lol!
June 24, 2008 at 6:09 AM

Anonymous said…
I didn't find this one, but I did find books I & II of this series at our library. Only book II is audio and I think that's the one I will start with.

The Bookworm said…
It does sound like a good one.

Becky LeJeune said…
I must have been on vacation when this came up, I can't believe I missed this post. I absolutely love Lori Andrews's series! I've read the first two and they're really fun. I've had this one on my wish list for a while now. Can't wait!
July 13, 2008 at 10:49 AM