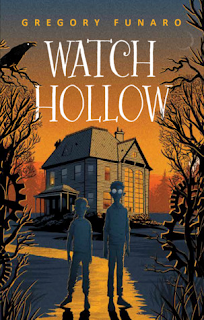 Deep within the enchanted woods in the town of Watch Hollow stands the once-grand Blackford House, whose halls hold a magical secret: a giant cuckoo clock that does much more than tell time. But when the clock’s gears cease to turn, an evil presence lurking among the trees begins to come out of the shadows.

When Lucy and Oliver Tinker arrive in Watch Hollow, they have no idea that anything is wrong. A mysterious stranger has made their father an offer that’s too good for him to refuse. All Mr. Tinker needs to do is fix the clock at Blackford House and fistfuls of gold coins are his to keep.

It doesn’t take long, however, for the children to realize that there is more to Blackford House than meets the eye. And before they can entirely understand the strange world they’ve stumbled into, Lucy and Oliver must join forces with a host of magical clock animals to defeat the Garr—a vicious monster that not only wants Blackford House for itself, but also seeks to destroy everything the Tinkers hold dear.

As Lucy and Oliver learn about the magical world they’ve stumbled onto, the shadow woods beyond their front door grows stronger, and an evil emerges intent on capturing the clock animals and destroying everything the Tinkers hold dear. It’s a fantastical adventure by the author of the New York Times bestselling Alistair Grim’s Odditorium series, Gregory Funaro.

I first was introduced to this author, Mr. Funaro when he wrote his darker suspense novels. Which I just enjoyed a lot. Than, Mr. Funaro started a new journey into young adult author. The Alistair Grim's Odditorium series is great. It is magical and whimsical. All ages from children, teens, to adults can enjoy that series. Mr. Funaro's newest offering is not to be missed. I absolutely had a magical and fun time getting to know the Tinker's and all of the animals in this book. Mr. Funaro strikes gold with Watch Hollow! Guaranteed to be one of the "not to be missed" books of 2019!

Lucy Tinker was my favorite. She just went with the flow. She never really questioned why there were magical animals who could talk. All she knew is that she had to save them. Yet, when the situation got tough her brother, Oliver and her dad both came to the rescue as well. Because that is what family does.

There are twelve magical animals featured in this book. Although, there are a few that played bigger roles. There is Fennish Seven, a rat, Torsten is a dog, Meridan is a cat, and Tempus Crow. Although, we don't like Tempus Crow as he is the henchman for the evil, Garr. Garr resides in Shadow Woods. He is capturing all of the animals.

This book is a quick read. That is the downside to the book; this is because I didn't want it to end. I loved every moment of this book. The ending does lead me to believe that this will not be the last time that readers will see the Tinkers, Fennish Seven, Torsten, and the other animals. Which I really hope is true.