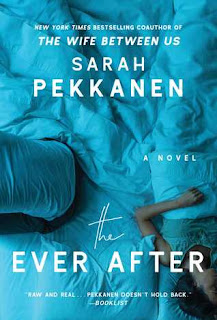 Josie and Frank Moore are happy… at least Josie thinks they are. As parents of two young girls in the Chicago suburbs, their days can be both busy and monotonous, and sometimes Josie wonders how she became a harried fortysomething mother rather than the driven career woman she once was. But Frank is a phenomenal father, he’s handsome and charismatic, and he still looks at his wife like she’s the beautiful woman he married more than a decade ago. Josie isn’t just happy—she’s lucky.

Until one Saturday morning when Josie borrows her husband’s phone to make a quick call—and sees nine words that shatter her world.

Now Josie feels as if she is standing at the edge of a sharp precipice. As she looks back at pivotal moments in the relationship she believed would last forever, she is also plunging ahead, surprising everyone (especially herself) with how far she will go to uncover the extent of her husband’s devastating secret.

I really enjoyed The Wife Between Us. The book got me very excited to read more from the authors. Thus, when I saw this book from co-author, Sarah Pekkanen I had to check it out. While, I liked this book, I did not love it like The Wife Between Us. However, the author did a good job of bringing the characters and the story down to Earth. What I mean by this is that the story is very relatable. Sadly, there are a lot of people who have affairs. Until you are faced with this situation, you can't truly judge someone. Thus, the reason I could relate.

The different degrees of emotions that Josie experienced were understandable. Yet, what I really liked was the fact that she did not pity herself the victim but instead took control of the situation. She did her own investigating while calling out her husband. Speaking of Frank. I had mixed feelings about him. As I got to know him, from when he was kind to Josie when they were dating and newly dating to the present; I did not despise him.

Now, when it comes to the ending; I am sure readers will again have mixed emotions. Some will like it and others will not agree with it. For me, I am on the side of "like". Again, while I did not feel so strongly about this book; I can't wait to check out the next one by this author.