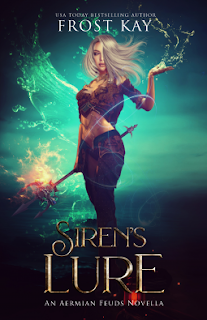 As a pirate captain, she's made it her life goal to destroy those who have stolen from her. After one miscalculation, she finds herself cast into the sea with a man's life in her hands.
She should let him drown, but despite the warnings ringing in her mind, she saves the human, exposing a secret she's protected all her life.

A secret that could destroy an entire race.

MERMAID lovers are ADDICTED to this new dark fantasy tale. One click now to dive into your next book obsession!

I recently finished reading Seafire by NC Parker. So, I was revived to read more female sea captain stories. So, reading this book, my expectations were very high. This book started out ok but after several chapters in, I was almost ready to be done with the book. Than I did some research and found out that this book is part of a series. One that I have not read any of the books in the Aermian Feuds series. So, this kind of explained my confusion and instant connection with the characters or the storyline. Unless you are already an established reader of this series, I would not recommend starting this book. It is not really meant as a stand alone but more of a companion read. Although, once I did get further into the storyline; I did find my groove with this book.

Lilja's is a good sea captain but I felt she could have been stronger. Yes, it was nice that she had a soft spot in saving Hayjen; even if she didn't have to. Yet, I still felt like she was wishy washy at times and never could commit. There wasn't anything that interesting about Hayjen. Now, this is where my lack of the prior novels comes in. These characters may have been introduced and their character development explained in more detail with the prior novels but I didn't think Hayjen was much of a love interest in mind. Overall, those a nice read.
Frost Kay

RocketPaper said…
I can recommend an excellent writing service https://rocketpaper.net/blog/how-to-write-a-term-paper-in-one-night
September 12, 2018 at 7:04 AM