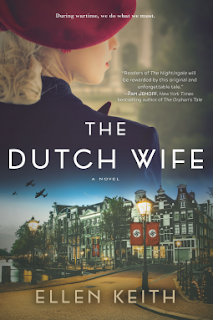 A sweeping story of love and survival during World War II

AMSTERDAM, MAY 1943. As the tulips bloom and the Nazis tighten their grip across the city, the last signs of Dutch resistance are being swept away. Marijke de Graaf and her husband are arrested and deported to different concentration camps in Germany. Marijke is given a terrible choice: to suffer a slow death in the labor camp or—for a chance at survival—to join the camp brothel.

On the other side of the barbed wire, SS officer Karl Müller arrives at the camp hoping to live up to his father’s expectations of wartime glory. When he encounters the newly arrived Marijke, this meeting changes their lives forever.

Woven into the narrative across space and time is Luciano Wagner’s ordeal in 1977 Buenos Aires, during the heat of the Argentine Dirty War. In his struggle to endure military captivity, he searches for ways to resist from a prison cell he may never leave.

From the Netherlands to Germany to Argentina, The Dutch Wife braids together the stories of three individuals who share a dark secret and are entangled in two of the most oppressive reigns of terror in modern history. This is a novel about the blurred lines between love and lust, abuse and resistance, and right and wrong, as well as the capacity for ordinary people to persevere and do the unthinkable in extraordinary circumstances.


This is the first book I have read from this author. Yet, I was drawn to this book due to the summary. I am a fan of this time period and have read many WWII books. Instantly, I was transported back in time. Ms. Keith breathed such life into the characters and the story. There are three main voices...Marijke, Karl, and Luciano. While, I liked Luciano; I just didn't feel as strongly as I did Marijke and Karl.

I would never wish anyone to be in a concentration camp. The deplorable living conditions if you can call them "liveable" are horrific. However, Marijke was a ray of sun shine and strength. She really helped the other girls to keep their spirits up. Where Karl is concerned, he was kind of the odd man out as well. He had too nice a nature to be an officer. Yet, his sweet attitude lended itself nicely to his and Marijke's relationship.

I like how this book was laided out with the alternating voices. It really did give me a chance to grow closely to the characters. Plus, all of the locations was like I took an international trip while reading this book. The Dutch Wife is not to be missed.
Ellen Keith