Sail Away with Me 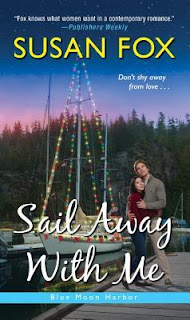 Bookseller Iris Yakimura grew up on Destiny Island and it’s the only place where her painful shyness doesn’t cripple her. An avid romance reader, she believes that one day the right man will come along—one who loves her just the way she is. She never imagines that man will arrive in time for the holidays, like a gift. Or that he’ll be a celebrity musician with a bad boy vibe—and a warm
heart . . .

Julian Blake spent most of his teens on Destiny Island, before fleeing a mentor turned abuser. Music saved him. He has avoided the island, but now his injured father needs him. Plagued by unsettling memories, Julian’s solace comes from surprising places—and from smart, stunning Iris. When he feels compelled to expose his abuser, will Iris find the courage to stand by his side in the spotlight that will ensue—much less embrace a love that might take her far from home?

I thoroughly enjoyed this latest offering in this series. Iris and Julian projected such range of depth and emotions. They were really good for each other. In other words "soul mates". Both of them were a little broken; Julian more then Iris. Yet, when they were together they made beautiful music together. Example is when Julian and Iris shared their first kiss. Julian says "I think we should leave it there, a perfect first verse". In that moment, I felt the heartache and love at the same time. It was hotter then a sex scene. Which, they did not hook up until more then half way through the story. Iris and Julian were more about forming a true connection.

What happened to Julian in his past is relevant to the present. It shows that abusers can come in any shape or form and not just to women. The physical abuse may stop but the emotional one lingers. Julian was very thankful that he had Iris by his side. The other characters in this story helped add to it. They were not just second string. Ms. Fox writes a beautiful story filled with emotional characters that will draw you and make you want to stay in Sail Away With Me.
Susan Fox