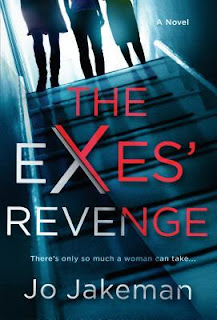 A wickedly dark debut thriller about three women who've all been involved with the same man and realize the one thing they have in common is that they all want revenge against him...

Divorces are often messy, and Imogen's is no exception. Phillip Rochester is controlling, abusive, and determined to make things as difficult as possible. When he shows up without warning demanding that Imogen move out of their house by the end of the month or he'll sue for sole custody of their young son, Imogen is ready to snap.

In a moment of madness, Imogen does something unthinkable--something that puts her in control for the first time in years. She's desperate to protect her son and to claim authority over her own life.

But she wasn't expecting both Phillip's ex-wife and new girlfriend to get tangled up in her plans. These three very different women--and unlikely allies--reluctantly team up to take revenge against a man who has wronged them all.

It was easy to find myself cheering for the three women as they got their revenge on Phillip. He made himself very unlikeable. If there was someone that deserved to get their "just rewards" with three vengeful women, it was Phillip. Even when it was revealed the reasoning for his demeanor, it did not change my feelings towards him.

When it came to the women, instantly, I got an mental image of the three women as The three women in the movie, The Other Woman starring Cameron Diaz, Kate Upton, and Leslie Mann. While this book is nothing like a comedy, the women just came off as kind of klutzes and just "so-so". Although, anyone finding themselves in their situation for the first time would probably come off as amateur.

Despite the fact that I didn't like Phillip, I didn't bond that closely to the women either. Therefore, I only semi felt bad for them. Overall, though this is a good read. "Players be warned as a woman scorned is one to be feared".
Jo Jakeman