A Hundred Fires in Cuba 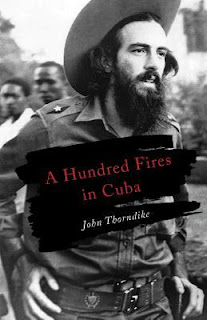 In the spring of 1956, a young American photographer falls in love with a Cuban line cook in New York. They have a ten-week affair which ends when Immigration arrests and deports him, and by then Clare Miller is pregnant.

Few Americans know the name Camilo Cienfuegos. All Cubans do. He was the most charismatic of Castro's rebel commanders. But Clare, who never hears from him after he's deported, believes he has died in Fidel's invasion of the island. She marries a wealthy Cuban businessman and moves to Havana with her two-year-old daughter, only to discover that her first love is not only still alive, he's now head of the Cuban Army. Clare knows that Camilo likes to dance and drink. He likes women, and too many women like him. Though his courage is legendary, when he comes to visit at night he's afraid of his daughter's moods. He feeds her, he reads to her, he changes her diapers, but for him an all-night march would be easier. Clare worries that he'll never make a good parent, but she cannot resist him.

Instantly, I could tell that Mr. Thorndike is a talented writer. Right from the beginning, I was transported to Cuba from the descriptions of the scenery to the people. From the first introduction, I became a fan of Clare. She had a feisty spirit, even through she was in a foreign country. Plus, she came off as kind and the type of person that I would want to hang out with. Her and Camilo's relationship was filled with "real love". Sure, Camilo could have any woman or women that he wanted but the first time that they had sex; he was actually aware of Clare's feelings.

Additionally, this book shows the relationship between Camilo and Castro with Castro's rise into power. Anyone looking to read a really good book that is rich in storytelling as well as the people should pick up a copy of this book.