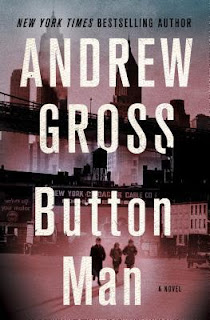 Morris, Sol, and Harry Rabinowitz grew up poor but happy in a tiny flat on the Lower East Side, until the death of their father thrust them into having to fend for themselves and support their large family. Morris apprenticed himself at twelve years old to a garment cutter in a clothing factory; Sol headed to college and became an accountant; and Harry, the youngest, fell in with a gang as a teenager and can’t escape. Morris steadily climbs through the ranks at the factory until he’s running the place and buys out the owner, and Sol comes to work with him. But Harry can’t be lured away from the glamour, the power, and the money that comes from working for mobster Louis Buchalter, an old bully from the neighborhood. And when Louis sets his sights on the unions that staff the garment makers’ factories, a fatal showdown is inevitable, and puts brother against brother.
This new novel is equal parts historical thriller, rich with the detail of a vibrant New York City in the 1920s and 1930s, and family saga, based in part on Andrew Gross’s family history, and will cement his reputation as today’s most atmospheric and original historical thriller writer.

I was first introduced to Mr. Gross and his work when I read a few of the books that he collaborated with Mr. Patterson. When Mr. Gross debuted his first novel by himself, I was hooked. Since than, I have been a fan of his. Although, I am behind some in reading every book from Mr. Gross, I can always count on him to deliver. I can assure you that Mr. Gross did deliver with this book.

Instantly, I felt like I was living in the 1920's and 1930's. Morris, Sol, and Harry brought the story to life. My favorite is Morris. He really strived to make the best man out of himself that he could be. He helped to inspire his brother Sol. He tried with Harry but Harry was hurting. I believe that Harry would have taken a different path in life if it was not for the loss of his twin when he was younger. He blamed himself and for this reason; Harry turned to a life of crime.

If you enjoy this time period or just looking for a great book to read, you need no look any further than this book. I could not stop reading. From the first page to the very last page, I was in it for the long haul. Mr. Gross really does take me on a journey filled with engaging characters and a wonderful story in Button Man!
Andrew Gross