A Secret to Die For 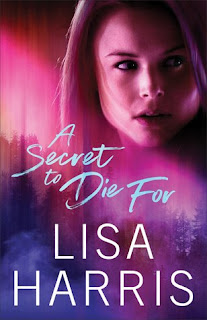 Psychologist Grace Callahan has no idea that she has a secret--one worth killing for. But when she finds out one of her clients has been murdered, she quickly realizes that the computer security specialist wasn't simply suffering from paranoia.

Detective Nate Quinn has just been cleared for active duty after a bombing killed eighteen people, including his partner, and left him dealing with PTSD. His first case back on the job involves the murder of Stephen Shaw, and his only lead turns out to be an old friend, Grace Callahan--and her life is in grave danger. Someone believes Shaw gave his psychologist information before he died. Information they are willing to kill for.

With her signature pulse-pounding suspense, Lisa Harris takes readers deep into the heart of fear in this race against the clock.

I was in the mood for a romantic suspense. Which this book is one. Yet, I thought the chemistry that Grace and Nate had was "medium". There is nothing wrong with "medium" but I was looking and hoping for "spicy". However, as this book is published by a Christian publisher, I can understand the heat level. On the bright side, this book is not preachy in regards to the word of God.

The story started out good. It had a intense scene. From there the next several chapters were still riding the high from the beginning. Grace did prove right away that she was not a helpless woman. Although, having some help does not hurt. Nate did a fine job of protecting Grace for the most part and solving the case. Personally, as much as I liked Grace and Nate; I could not establish that strong connection to them or the storyline. Readers of cozy mysteries may like this book.
Lisa Harris