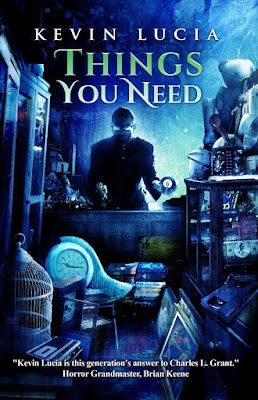 Clifton Heights is a modest Adirondack town offering many unique attractions. Arcane Delights sells both used paperbacks and hard to find limited editions. The Skylark Diner serves the best home-cooked meals around, with friendly service and a smile. Every August, Mr. Jingo's County Fair visits, to the delight of children and adults, also.

Handy's Pawn and Thrift sits several blocks down from Arcane Delights. In its window hangs a sign which reads: We Have Things You Need. Like any thrift store, its wares range from the mundane to the bizarre.

One night, a lonely traveling salesman visits. He's looking for something; something he desperately wants. Among the shelves of Handy's Pawn and Thrift, he will face a harsh truth, however. The things people want are so very rarely the things they need.

I was drawn to this collection of short stories by the concept. The first several stories were fine. They had a bit of a horror element to them. Yet, the overall feel of the stories in this collection were not scary at all. Well that scary in the sense that the stories left goose bumps on my arms. Which is what I was kind of hoping and looking forward to.

Also, to be honest; in the beginning I actually did not catch or I missed that this was a collection of stories. I was in the middle of the second story before I realized that it was not part of the first. The whole running theme of the stories was nice. Again, though, maybe if I could have connected better with the characters, the appreciation would have been higher. Although, don't take my opinion as the final one. I seem to be in the minority.


Author bio: Kevin Lucia is the Reviews Editor for Cemetery Dance Magazine. His short fiction has appeared in several anthologies.

His first short story collection, Things Slip Through was published November 2013, followed by Devourer of Souls in June 2014 and Through A Mirror, Darkly, June 2015. His next books, Mystery Road and Things You Need are forthcoming in 2018.