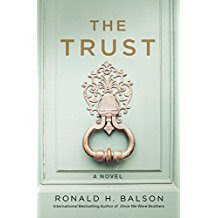 When his uncle dies, Liam Taggart reluctantly returns to his childhood home in Northern Ireland for the funeral—a home he left years ago after a bitter confrontation with his family, never to look back. But when he arrives, Liam learns that not only was his uncle shot to death, but that he’d anticipated his own murder: In an astonishing last will and testament, Uncle Fergus has left his entire estate to a secret trust, directing that no distributions be made to any person until the killer is found. Did Fergus know, but refuse to name, his killer? Was this a crime of revenge, a vendetta leftover from Northern Ireland’s bloody sectarian war? After all, the Taggarts were deeply involved in the IRA. Or is it possible that the killer is a family member seeking Fergus’s estate? Otherwise, why postpone distributions to the heirs? Most menacingly, does the killer now have his sights on other family members?

As his investigation draws Liam farther and farther into the past he has abandoned, he realizes he is forced to reopen doors long ago shut and locked. Now, accepting the appointment as sole trustee of the Fergus Taggart Trust, Liam realizes he has stepped into the center of a firestorm.

This is the first book I have read in this series. It can be read as a stand alone novel. However, for me, I think having not read the prior novels hurt me a little. Not in the sense of taking anything away from the storyline but more in character development and connection. I did not feel a close connection towards Liam or any of the other characters that much. Therefore, I struggled to stay emotionally invested in this book. Additionally, I found that the storyline seemed to move slowly. Although towards the end it did pick up. Reading all of the different character's opinions on who they thought was the killer was interesting. Yet, it was easy to weed out some of the choices. This book may not have been a good match with me but I would try this author again.
Ronald H. Balson