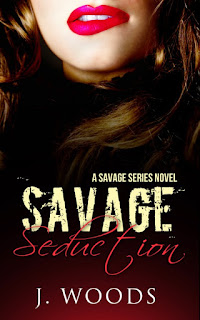 A wild affair, a deranged stalker and a mission gone wrong pushes Logan Savage to face dark memories of his past and an alluring passion he’s always run from.

Known for her independence, successful CEO Zoe Alcott makes no apologies when she finally takes a stand against her placid love life. Until the day she finds a love note from a deranged stalker and her safety is placed in the hands of Savage Security, led by the mysterious Logan Savage. Not her usual type, Zoe wonders if the instant passion between them is enough to convince Logan to break his only rule - never get involved with a client.

As the stalker becomes increasingly more dangerous, Logan continues to fight against his wild craving to throw the rules out the window and accept the advances of the troublemaker who is determined to drive him crazy. But when Zoe’s life is put at risk, Logan is left wondering - duty or desire?

This is the first book in this series. I did like this book. Logan is the type of guy you want protecting you. Also, he is the type of guy you imagine when you read romantic thrillers. So you could say that I had an easy time warming up to Logan. Although, when it came to Zoe, it took a little longer. This is because for a successful woman, I thought she would have come out instantly, as a fighter. She did but not right away.

The storyline was fine. I did find it a little unbelievable that the police would allow Logan to move in with Zoe until her stalker was captured. Yet, it lent itself to the perfect situation for Logan and Zoe to get closer to one another. Which, their chemistry was hot. The second half of the story was where it picked up in intensity. I probably would check out the next book in this series as I would like to get to know the other Savage men better.
J. Woods