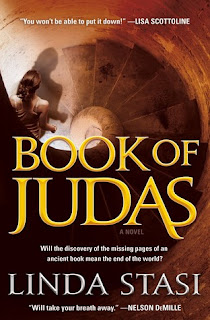 When her infant son is placed in mortal danger, New York City reporter Alessandra Russo is forced to save him by tracking down the missing pages of the Gospel of Judas, a heretical manuscript that was unearthed in Al-Minya, Egypt in the 1970's. The manuscript declares that Judas was not the betrayer, but the beloved, of Jesus. The Gospel disappeared, only to turn up decades later, rotted beyond repair in a Long Island bank deposit box. Rumors ran rampant that the most important pages had been stolen.

Do the lost pages reveal a secret that will challenge Christianity's very belief about the creation of life, or even the power to unleash Armageddon? What if such explosive documents fell into the hands of modern-day terrorists, dictators, or religious fanatics?

During her investigation, Alessandra is plunged into a dark world of murder, conspiracy, sexual depravity, and most importantly, a race against the clock to save her own child.

Alessandra Russo is back. When she shares her friend's good fortune as front page news, she never imagined that it sound send her into danger once again. Only this time, her son is also in danger. I praised Alessandra in the first book as being strong and smart. Yet, this time, she was still strong but I felt that she did do a dumb move by writing the story of her friend. Really. A friend tells you that he has come into a rare item but that it could bring Armageddon and your friend's father had stole the item; yet, you decide to write a story and tell everyone including starting to show people the item. Second, Alessandra did not pick up on clues as fast. Luckily, she made up for all of this when it counted most.

The second half of the story is where Alessandra finds herself really on a journey to solve the mystery while fighting to stay alive. The second half of my reading experience did go by faster as well. The mystery surrounding Judas was intriguing. While, I have never read Dan Brown's books I have seen the movies. This series kind of reminds me of The Da Vinci Code. I do look forward to seeing Alessandra again.
Linda Stasi