The Corner of Forever and Always + Giveaway 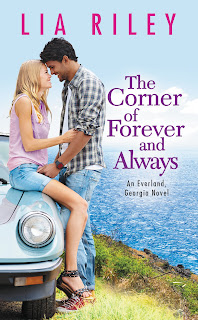 Fairy tales aren't ever what they seem . . .

Tuesday Knight's dream of Broadway stardom has flopped, leaving her unemployed and brokenhearted. Ready to quit kissing frogs and make her own happily-ever-after, she takes a job as a princess in Everland, Georgia's historical amusement park.

Mayor Beau Marino lives an unenchanted existence-all work, no play-which is fine by him. After his marriage ended in disaster, the last thing he wants in his life is more drama. But Everland's new free spirit has a talent for getting under his starched collar.

When the town's beloved but bankrupt park might be shut down, Tuesday and Beau face a choice. Can they join forces, save the day-and each other? Or will their fierce battle of wills destroy any chance of a fairy-tale ending? 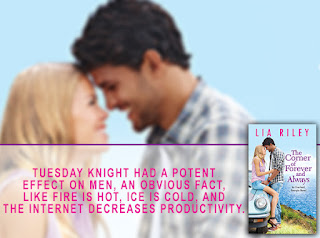 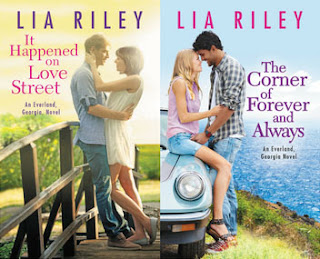 
IT HAPPENED ON LOVE STREET, #1
THE CORNER OF FOREVER AND ALWAYS, #2 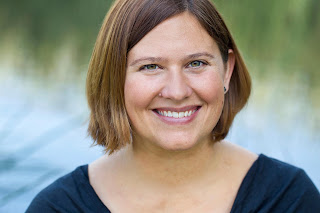 Lia Riley is a contemporary romance author. USA Today describes her as "refreshing" and RT Book Reviews calls her books "sizzling and heartfelt." She loves her husband, three kids, wandering redwood forests and a perfect pour over coffee. She is 25% sarcastic, 54% optimistic, and 122% bad at math (good thing she writes happy endings for a living). She and her family live mostly in Northern California. 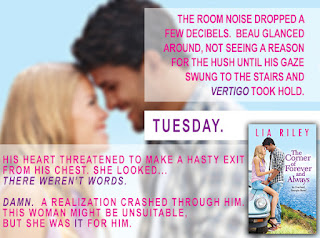 “I’m nervous.” The tightness in his tone backed up the muscles bunching near the hinge in his jaw. And the simple, honest admission did something to her that no amount of flirtatious back-and-forth ever would.


“So am I.” She began buttering the dish. “Who taught you how to cook?”


He stirred the chocolate in the double boiler, hands clenching the spoon. “Mama used to say that a man needed to know three things: how to fix a dessert, iron his own shirt and sew a button. That some day future women would thank her.”


“Smart lady.” Tuesday laughed, grateful for a moment to recalibrate, to slow her racing heart. “I suck at ironing by the way.”


Beau gave her a resolute stare. “I make my own starch.”


“One tablespoon of cornstarch in two cups of water.”


Her gaze fixed on the rare smile tugging the corner of his mouth. The revelation was oddly endearing. “I’m not sure whether to be impressed or terrified.”


“Your mama didn’t teach you these things?”


Tuesday thought. “We grew up in small town Maine.”


“So, so cold. So much snow. So much cold. Beautiful though.”


“Yeah, good idea. My dad ran a maple sugarbush farm, made homemade maple syrup. Mom was his opposite. He loved being outdoors. She liked being inside. I guess they were opposites,  must have attracted at some point but over time they repelled each other. Pushed one another further and further away. She left when I was in high school. Moved down to New Hampshire where she was from and met a banker. They live in the suburbs. She has a housekeeper now.”


“She abandoned your family?”


“I. . .you know, I don’t know. My sister thinks so. I was the baby. My mom used to love to style my hair. She could do so many intricate braids. We didn’t have much money but she’d shop at thrift stores and garage sales and find me cute dresses. Sometimes I’d find her sad and I’d try to cheer her up. I’d ask her to brush my hair and she would,  even though sometimes I could hear her sniffling and I knew if I turned around I’d see her crying.”


Tears sprang to her eyes and she ground her fists into them. “Wow. Hello! Where'd these come from.” God, way to keep things light. Her inconvenient emotions would probably sink the night.


“Can we return to the regularly scheduled programming? Chocolate is always the cure.”


Beau looked like he might press forward but changed his mind at the last moment. “My mama taught me how to separate yolks from whites. Can I show you?”


“I won’t pretend that I have skills. Instruct away.”


She selected a brown one and he stepped behind her, her back heating against his  chest. His arms slid over hers. “Now what you do is give it a tap to open the shell. No! Not so big, just a little one.” His hand engulfed hers, guiding the movement. “Good. That’s real good. Now let the yolk settle in one side. That’s it. Now you start to transfer the egg back and forth and back and forth, let the white run out like that until voila! All you have left is the yolk.”


Tuesday gawked at the golden yolk in the shell. “Martha Stewart eat your heart out.”


He checked the chocolate and milk, it had melted down into a decadent pool.


“Can we eat that as is? I’m sure the souffle is amazing and all but hey, a bowl of melted warm chocolate is going to do me fine.”


His laugh was just as decadently rich. “Haven’t you ever heard that good things come to those who wait?”


“Sure, by people waiting,” she quipped. “They need something to tell themselves.”


That really got him going, his deep laugh rich as sun-warmed molasses. “Let me make you a deal.”


“Smart woman. When you have this dessert, you are going to say it’s better than the best sex you’ve ever had.”


She set her hands on her hips. “You have a low opinion of my sex life.”


“Nah.” He winked. “Just a very high opinion on my soufflé.”


Standing behind her he continued to help guide her effortlessly through measurements and pouring, mixing and stirring. He didn’t grind on her or get perverted, not that she’d have minded. Chocolate was meant to be an aphrodisiac and she’d never experienced anything so sexily mundane as chatting over nothings in the kitchen with a man who didn’t try to cop a feel. He appreciated and and even savored her for who she was and what she offered which right now was fully dressed fairly polite company.


In fifteen minutes he opened the oven and slid the soufflé in.


“We wait,” he answered. “Until it’s puffed on top and jiggly in the center.”


“You have a way of making cooking sexy.”


“You make breathing look sexy.” His gaze lingered on hers for a few beats before he turned and began to wash the dishes.


She stared at the back of his head, his broad shoulders, his narrow hips, blinking in surprise. He seemed wholly unaware that he’d broken her heart and put it back together, refashioned into something new, stronger and brighter. 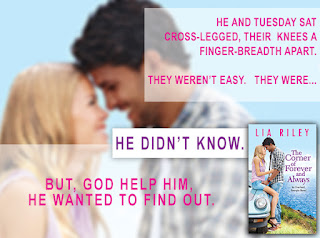