The Things They Didn’t Bury 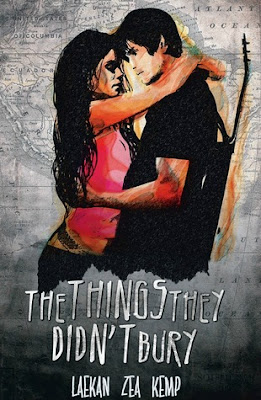 Review by Nancy Argentina wasn’t really the musical world shown in “Evita.” It was harder, crueler and, after Evita’s death when the men from the trucks entered villages and people: men, women and children – disappeared. Liliana’s mother was among them. Her father took his daughters to the US for safety but returns ten years later (Liliana is now 18) when his wife’s mother dies. There is a house and vineyard to care for and he goes home with the girls. Diego, grape and guitar picker saw the violence first-hand. Saw what was done to folks who only played music in alleys. He never saw them again, but found his life in his guitar. It is what keeps him breathing. He does not need involvement is useless adventures, no matter how pretty the girl is. But Liliana is determined to find out what really happened to her mother and Diego can’t stand for her to go into dangerous places in Buenos Aires alone. What a fascinating story! Diego and Liliana were perfectly done and the history of Argentina done with great research. There are things that should be known about revolutions and what happened to the disappeared people is one of them. Although the truth Liliana seeks may not be what she was hoping for, she was independent and strong just as Diego was caring and protective. History, a little romance, wars and family. It’s all there to suck you in and keep you until the end. It was wonderful And here's the synopsis: The war took everything. Except the truth. When Liliana and her family move back to Argentina after seeking refuge in the States during La Guerra Sucia, a lifetime's worth of wondering comes to a head, reigniting the search for what really happened to her mother, one of the thousands of los desaparacidos—the disappeared. With the help of a young Flamenco player who saw the atrocities committed by the military firsthand, Liliana not only makes the devastating discovery of what really happened to her mother but by forcing open the country's old wounds as well as her own she also learns a disturbing truth about her origins that will reconstruct the lives of the people she loves most. Seamlessly alternating between the voices of mother and daughter—one trying to survive the rising chaos of La Guerra Sucia and the other sifting through its aftermath, The Things They Didn’t Bury is a novel about forbidden love and family secrets. Gripping, heartbreaking and lyrical this is not a story about war or about the secrets still buried beneath its wreckage but it is a story about the things they didn't bury, intangible and infinite—love, truth, and family. If you need any more information feel free to shoot me an email or check me out on goodreads or on my blog! -- Laekan Zea Kemp Purchase on Amazon or Barnes and Noble
Laekan Zea Kemp