The One I Left Behind. This book is a must read! 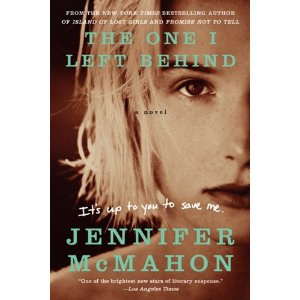 The year is 1985. It is the year that Reggie will never forget. This is the time when Reggie should be enjoying being a teenager, hanging with her friends, and crushing on a boy. Instead, it is masked with a serial killer named Neptune. Neptune kidnaps women. He cuts off their hand and leaves it in a milk carton on the police steps. Five days later, he disposes of their body.


Reggie sees her mom get into a car and knows it will be the last time she will she her. Yep, Vera is Neptune’s last victim. Only this time is different. Her body is never found. That is until Reggie receives a telephone call. It has been two years but all of a sudden Reggie’s mother, Vera has reappeared in a homeless shelter. Reggie has a chance to finally close the books on what happened to her mother all these years ago.

Jennifer McMahon is a new to me author. After reading this book, I plan to check out some of her prior novels. Also, you can bet that she will now be added to my list of authors to keep an eye on.

I picked this book up as it sounded intriguing and maybe something that would get me out of my reading slump. Wow, did this book ever get me inspired again. Ms. McMahon drew me in with her writing and the characters. This book was not so much about trying to find out the identity of Neptune as much as it was about the story and my connection with Reggie, Tara, Charlie, and Reggie’s mother, Vera. While, I was intrigued to figure out who the killer was and I thought I had it all figured out. I was even proud of myself as I thought I had it solved before Reggie. However I was wrong and let me say that I was not disappointed when the true identity of Neptune was revealed. This book is a must read! It deserves a permanent spot on your bookshelves.