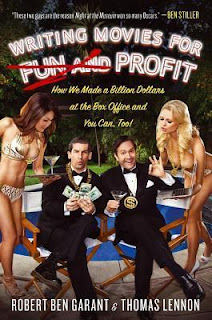 First off, if you are expecting to really get some good informative information about how to write your first screen play for the big screen, then you probably will get your hopes let down with this book. Not to say that Mr. Garant and Mr. Lennon did not provide the reader with some good street smarts and lessons that they have learned in only a way that Mr. Garant and Mr. Lennon can do. While, I did enjoy Mr. Garant and Mr. Lennon's let it all hang out their sense of humor and say anything attitude in this book, I was expecting to laugh until tears came out but this did not happen. Instead, I read about the first half of this book and then just skimmed the rest of it.

It is understandable how their television show Reno 911 became as sucessful as it was and some of their movies as well. Of course, after reading this book, you can not really blame them for Herbie:Fully Loaded. I am sure what they original wrote was good but after all the other screen writers got their hands on the script, including the director and horrible actor (she who shall not be named but is still alive and not dead). the movie just ended up being a big flop.

Important tips you can take away from this book is...Don't bank on just one script, have several. Have a good entertainment lawyer, Dress to impress, Pimp your movie, write your script with a big movie star in mind to play the starring role as they will help to make your dreams come true. Because once you have made it, then you will score the best parking spots at all the major studios.

If you would like a chance to check this book out for yourself, I have one copy to giveaway. U.S. Only
Leave your email address. Contest ends July 15th
Robert Ben Garant Thomas Lennon