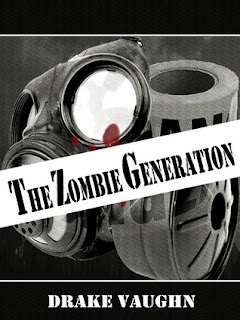 Warner is trying to survive in a world filled with "buggers". Hey, in this book they are called buggers, get over it. It is not easy. You can lose your mind...literally. This is what is happening to Warner. He can not tell fiction from reality. He keeps having "figs" short for figments. Things get worse when Warner is attacked by a bugger and is infected. It is only a matter of time before Warner turns into a bugger. Warner comes upon a group of survivors. Now Warner must decide to take the high road alone or the low road and protect the survivors.


I was middle of the road with this book. On one hand I liked Warner. The way that he described his transformation was great. I have read many zombie books and the author usually spends their time focusing on the zombies then the living. Mr. Vaughn's profile states that he likes to focus on offbeat thrillers and horror with a psychological bent. This is exactly what Mr. Vaughn did with this book. He kept me pondering if the people around Warner were real or just "figs".

On the opposite hand, I felt that the book was slow in the beginning and it took me a while to get into it. This is because the beginning felt like I had picked up this book and started reading it at chapter four. The buggers were a cross between your new age zombies and your old age zombies. They still walked around with gazed looks in their eyes and they could not really form words but these buggers did have a great sense of smell. They could instantly pick up the smell of alcohol. Which is a bummer if you are one of the last people living and you wanted to drink as you better find a safe place to drink and hope that when you slept it off that you woke up from your hangover. Also, you better have a gun handy as these buggers are hard to kill. Just one shot in the head will not always take them down. The last half of the book is where my interest peaked. I could see this book being turned into a Quentin Tarantino movie as Mr. Vaughn has that offbeat humor about him.