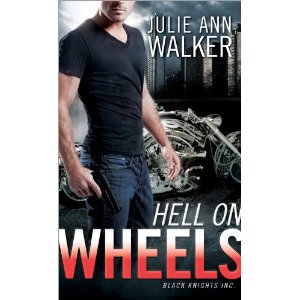 In one heck of a ride, Hell on Wheels lifts its reader up and hauls you along on a tale worthy of Mission: Impossible. Nate Weller, black-ops if ever there was one; is back from the sand, bringing with him memories of torture and the death of his best friend. He has to be the one to tell Grigg’s parents he wasn’t coming home this time – or ever. A bad enough task alone but when you add in he also has to tell Grigg’s sister, Ali. Ali who has kept him awake since he was 21 and she was 17. Ali the love/lust of his life and someone he could never have.


All is seemingly well for a few months until Ali starts noticing things aren’t quite right in her world. Things are moved in her home, she keeps seeing someone out of the corner of her eye…..then she’s the victim of an aborted mugging. It all adds up to something she doesn’t know but wants desperately to. So off she goes to Chicago in search of answers. Twenty hours from Jacksonville and twenty hours until her life changes forever.

Grigg worked for Black Knights, Inc. a motorcycle shop in the Windy City. Not likely. He, along with Nate and various others was a mechanic when he had to be but he also was a sniper, spotter for Nate (considered the best of the best). Ali meets his boss, Frank, the others in their group and immediately knows that they are far, far more than she or her parents thought. They also find bugs (electronic!!) in all her underwear which sets off a paranoia unknown to the kindergarten teacher.

The games being played (bad and my favorite: girls vs guys) make this tale impossible to put down. You will love the interplay between Nate and Ali plus the rest of the team. When you meet Peanuts, you’ll laugh your head off and then cry because he’s such a comfort to Ali. Definitely pick this one up!