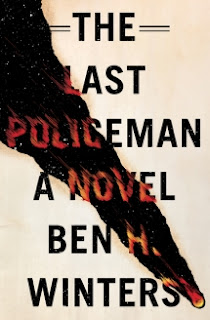 In just six months, the world is going to be destroyed by asteriod 2011GV1. With this impending doom, everyone has just decided to stop what they are doing. People have walked off their jobs. Just because everyone has stopped working does not mean that the crime has stopped.


Detective Hank Palace is investigating a murder. Just because the world is about to end does not mean that Hank is going to stop solving murders. He has wanted to be a detective and this is his chance to finally do right and catch the bad guys

I have recently gotten into post-apocalyptic books. So the idea or a pre-apocalyptic book is what drew me to this book. Unfortunately, I tried several times to get into this book but I just could not. The beginning moved extremely slow for me and there was nothing to grab my attention and make me hang on. The characters were kind of downers with the count down of the asteroid coming in six months. They knew that after the asteriod crashed that the end was here, so people just gave up caring and doing anything. Detective Palace was the only bright spot in this book. He did fight for something...justice. The mystery aspect of the book was good but again I felt the steps towards solving the murder was slow. Hopefully the next book is better.