I dedicate The Rock Star in Seat 3A to anyone who dared to dream or having a fling with a rock star! 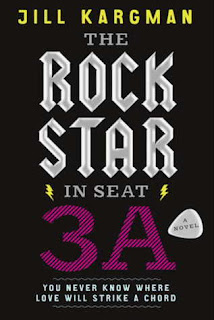 Hazel is a major video gameaholic. This is perfect as she works for Badass Games. Their greatest claim to fame is Pimps N; Ho's. Hazel is going out to LA to coordinate the release party of Pimps N' Ho's, Volume 5. Hazel has a good job and a great boyfriend in Wylie. Wylie is a chef. Hazel loves to eat and thus she is the perfect taste tester for Wylie's food.


During a game with friends, they shared if they had a "pass" from their partner, who would they have sex with. For Hazel, this is a no brainer. Finn Schiller, lead singer of The Void. Hzael has the opportunity to make her dream come true, when during her flight to LA, she is seated next to Finn in the flesh. What is a girl to do when a rock star wants to jump her bones.

I dedicate The Rock Star in Seat 3A to anyone who dared to dream or having a fling with a rock star! Book your ticket for The Rock Star in Seat 3A. I liked this book a lot. I wanted to be mad at Hazel for hooking up with Finn and leaving Wylie as he was a sweet heart but I could not stay mad at Hazel. Finn was also a gentleman. He is not what you would first expect from his persona. Finn treated Hazel like a goddess. They were so dorky together, that they made a good match. Plus, I could never be upset with Hazel as she makes up for her imperfections with her snarkiness, which I love. I will be checking out more books by Jill Kargman.
Jill Kargman.

Tina said…
I read this one and thought it was a bit bizarre. I just could not get into any of the characters at all and to me, the storyline was a bit boring. Glad that you enjoyed it though! and yes, other books by this author are available and very entertaining.
May 17, 2012 at 5:10 AM